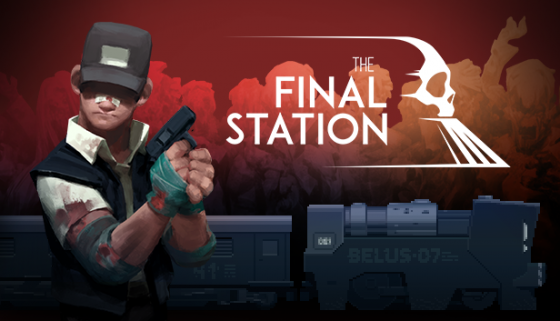 We got to check out another batch of games for this edition of Gamebox 2.0, including the much anticipated release version of The Final Station, a surprisingly fun tie-in to The Huntsman: Winter’s War and a mobile game that turns Tinder into a wacky medieval adventure.

The Final Station: After playing it at PAX East and as a demo, the final version of The Final Station is out and it’s excellent.  Sort of like pixel art version of The Last of Us crossed with Snowpiercer, you play the conductor of a train making it’s way through an apocalyptic Earth that has been dealing with an alien outbreak that is transforming people into vicious tar black monsters.  Even with it’s old school look, it does an incredibly job of setting a tense and moody tone and there’s so much great little tidbits about the world that you pick up from characters and notes on computers and walls.  The basic gameplay has you riding your train to a new stop and then, once at the stop, you have to find that key code for a blocking unit that will unlock your train and allow you to continue.  There’s an incredible mechanic where rooms in the various buildings at each stop are hidden until you open them and there’s always a sense of dread that the next door could unleash a swarm of monsters and you usually only have a few bullets for your gun.  There’s also a crafting system and you have to maintain your train and the survivors you pick up as well.  It’s just overall an amazing game and it’s available right now on PS4, Xbox One and PC.

Strike Vector EX: Available on PS4 right now, Strike Vector EX is an arcadey space shooter that is reminiscent of games like Crimson Skies, where you are engaging in fast paced dog fights against enemy fighters.  In the campaign, you start out working for the corporate Consortium but you quickly bail on them and their overbearing rules and regulations and join a band of pirates who conduct raids and take various missions for anyone willing to pay.  You pilot a Vector, which can switch between a stationary mode that is better suited to aiming your weapons and a boost mode, which lets you get into better positions or escape enemies.  There’s a variety of weapons and special abilities to use and mulitplayer is a major component as well.  It’s easy to pick up and plays great and if you’re looking for a more arcadey space shooter, this is one to check out.

Dungeon Punks: Out now for PC, PS4 and Xbox One, Dungeon Punks is an old school brawler with an awesome art style but is a little rough in other areas.  What sets Dungeon Punks apart from recent brawlers and some of the classic of the genre is it’s tag team mechanic, where you have three characters which, in solo mode, you can switch to at any time.  If you are playing with friends, they obviously control their own character but everyone also picks a second character who can tag in at any time.  Each character has specific special abilities and as you fight enemies, you build up your mana and are able to use them with specific button combos.  You also collect loot during battle and you can level up and equip new items between missions.  The fighting is solid but it doesn’t feel as solid and satisfying as some of the classic in the genre or even recent entries like Castle Crashers and some of the UI and on screen effects don’t feel completely finished.  It’s still solid and if you’re looking for a new old school brawler to play co-op with some friends, check it out.

The Huntsman: Winter’s Curse: The movie, The Huntsman: Winter’s War, just came out on Blu-Ray and DVD and, by all accounts, it was pretty terrible but the tie-in game is actually a fun and solid RPG.  Taking place, I believe, after Snow White and The Huntsman, you play as Elisabeth, who sets out on a quest to find her four brothers who have all vanished after leaving home.  The game is a turn based RPG but it has a pretty unique card based combat system, where you get three cards from your “deck” that is created from the items you have equipped and you have to choose one to use as an attack or defense option.  There’s also a track at the top of screen showing whose turn is coming up next and certain cards can put you ahead or behind the enemy, so that adds to your strategy and action decisions.  There’s also lots of dialogue based decisions to make as well and you’ll run into movie characters like Chris Hemsworth’s Eric and the threat of Freya’s army is hanging over the world as well.  None of the cast lends voice, as the dialogue is all text based and the art style is a very cool storybook, painted style.  Despite it’s tie-in to some not so great movies, if you’re an RPG fan, it might be worth a look.

Reigns: Tinder doesn’t seem like the best basis for gameplay but Reigns, from one of our favorite publishers Devolver Digital, turns the swipe right, swipe left mechanic of the dating website into a wacky medieval adventure where you play the king of a kingdom and are faced with decisions that have two different options and you swipe in the direction of what option you want to put in motion and the game proceeds from there.  There’s all kinds of crazy scenarios that can pop up, from rejecting a princess and starting a war, to training with a necromancer, to fighting a dragon and the goal is to last as long as you can before dying or being killed and then you take control of your successor and start over.  It’s on PC and Mac but this is a game that is perfect for your cell phone and is the perfect time killer while you are waiting in line or have a spare 5 minutes and it’s available on both Android and iOS for $2.99.

Nioh Demo: Available for another week on PS4, Nioh is your next fix of brutally hard action if you’ve beaten Dark Souls 3.  Coming from Team Ninja, who has experience with brutally difficult action with the Ninja Gaiden series, Nioh is set in the world of feudal Japan and samurai as you play William, who looks like Geralt of Rivia and seems sort of like Tom Cruise in The Last Samurai.  There’s a lot of similarities to the Souls games, like the necessity of locking onto enemies and the almost instant way enemies can kill you if you are not on your game but some new twists to that gameplay style is that William has three different forms for attacking, each with a strength and weakness.  For instance, the high form is more powerful but slower and could leave you more open to attacks while low form is better for defense but causes less damage.  The ability to see fallen fellow players is in Nioh as well but unlike the Souls games, their fallen forms are called Revenants and are brutal optional battles that can give you some excellent items if you win.  If you can beat either of the demo levels in the PS4 demo of the game, you’ll unlock some items that will help you when the full game releases late this year.