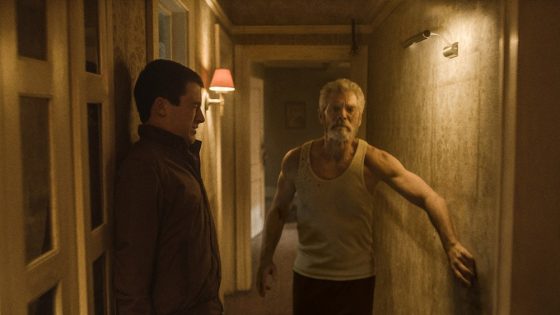 Don’t Breathe stayed on top for the Labor Day weekend which wrapped up Summer 2016, taking in another $15.8 million, putting it over $54 million for it’s two weeks out.  It’s already made more than Evil Dead made in it’s entire run back in 2013.

Suicide Squad remained in second with another $9.8 million, putting it over $300 million domestically and $675 million worldwide.

Pete’s Dragon took a huge leap up in it’s fourth week out, going from sixth last weekend to third this weekend with $8.5 million and it’s made just over $66 million total.

Kubo and the Two Strings and Sausage Part rounded out the top 5.

Further down the charts, Bad Moms has been silently one of the strongest comedies of the year, topping $100 million this weekend with it’s additional $6 million.

As far as new releases, The Light Between Oceans had a mediocre opening and only managed eighth place with $5.9 million, putting it tenth for Michael Fassbender starring movies and the worst wide release opening for Alicia Vikander.  It’s below even the worst performing Nicholas Sparks adaptation, which is The Choice from earlier this year.

Morgan almost didn’t even make it into the top 20, coming in 18th with a paltry $2.4 million.  Ex Machina topped it last year when it finally went wide in it’s third week of release.

Finding Dory returned to theaters over the weekend and made another $2.6 million, putting it over $482 million and cementing it’s status right now as the highest grossing animated movie of all time.