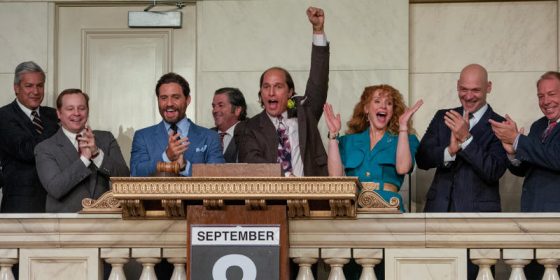 Matthew McConaughey was not screwing around getting into his character of Kenny Wells for Gold, gaining 40 pounds and shaving his head into a very unfortunate bald crown but it could pay off, as Gold could be one of the big Oscar contenders later this year.  Based on a true story, Kenny Wells is a down on his luck prospector who believes there’s a massive amount of untapped gold in Indonesia.  Basically betting it all on one dig site, he teams with geologist Michael Acosta (Edgar Ramirez) and they hit the motherlode, a vein of gold worth an estimated $18 billion.  Wells’ mining company hits the stratosphere but he has to deal with executives and Wall Street investors who want a piece of his company and the Indonesian government that may want to take the mine for themselves.  Bryce Dallas Howard and Corey Stoll co-star and it’s directed by Stephen Gaghan, who directed Traffic and Syriana, although this looks a little bit lighter than either of those films.  It’s out on Christmas Day and you can check out the trailer below.