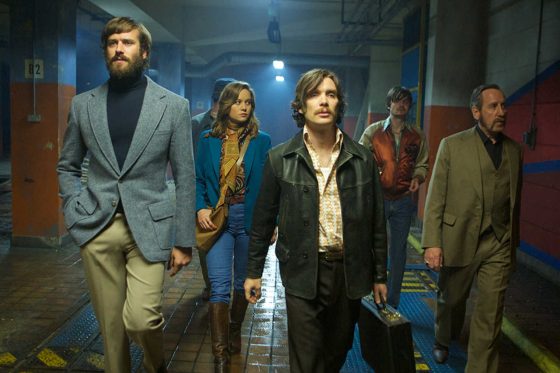 Ben Wheatley, who previously directed Kill List and this year’s High Rise, has another movie coming next year that look inspired by Guy Ritchie and Tarantino with the 70’s set Free Fire.  Brie Larson, Armie Hammer, Cillian Murphy and Michael Smiley are a crew looking to buy some M16s from Sharlto Copley’s gun dealer but he brings the wrong merchandise and things escalate into a shootout in the abandoned warehouse where the deal goes down.  It seems like the whole movie is set in the warehouse and everyone is apparently horrible shots, as there are tons of flesh wounds but no kills, at least in the trailer.  It looks like it has a really fun tone as the standoff wears on and the gangs try increasingly ridiculous methods to try and get out alive.  The movie premiered at TIFF this year to very positive reviews and should be out sometime next year, check out the Red Band trailer below.

The Man from UNCLE Trailer