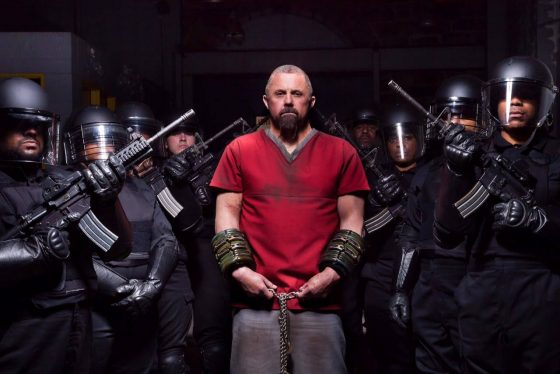 Being billed as essentially The Expendables of horror, Death House arrives next year with a cast full of horror icons.  Set in a prison that is home to the worst of the worst on the planet, people who can never be released back into the general public, the power goes out during a tour of the facility by two special agents and the prisoners are released and start wrecking havoc and there may also be something supernatural and evil happening as well that may force the agents to work with the five worst criminals in the facility, nicknamed “The Five Evils”.  Kane Hodder, Tony Todd, RA Milhailoff, Michael Berryman, Sid Haig, Vernon Wells, Bill Moseley, Barbara Crampton, Adrienne Barbeau, Camille Keaton and Dee Wallace are all featured in the film and the idea was originally concieved by Gunnar Hansen before he passed away.  The movie is schedule to be released sometime next year and you can check out the red band trailer below.