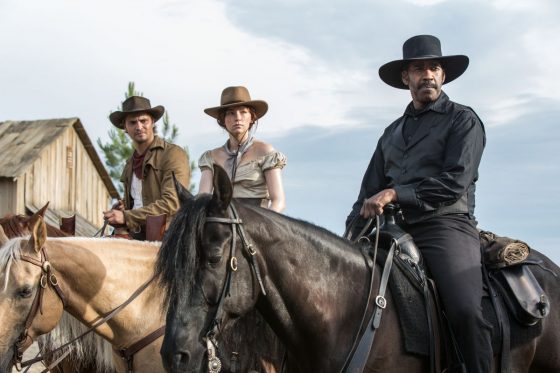 Faring much better than previous classic remake Ben-Hur, The Magnificent Seven took first place at the box office this past weekend with $35 million.  It’s Denzel’s third best opening and his best opening collaborating with Antoine Fuqua, ahead of 2014’s The Equalizer, which made $34 million it’s opening weekend.  For Chris Pratt, it’s his fourth highest opening as a star (Wanted made more but he was barely a supporting character in that).  It’s also the highest opening for a big budget western compared to the likes of True Grit, The Lone Ranger, Django Unchained and The Hateful Eight but modern westerns are pretty niche and The Magnificent Seven will probably just barely cross over $100 million total

Storks took second place with $21.8 million, down from other animated movies released in this same early September time frame in recent years like both Cloudy with a Chance of Meatballs movies and both Hotel Transylvania movies and it’s also below the opening for Mr. Peabody and Sherman, a movie no one remembers even coming out 2 years ago.

Sully dropped to third with another $13.5 million and it’s crossed over $92 million for it’s three weeks out, making it currently the fifth highest grossing movie of Clint Eastwood’s directing career.

Bridget Jones’s Baby and Snowden rounded out the top 5, both dropping about 50% from last week’s openings.

Further down the list, Suicide Squad is still hanging out in the top ten in eighth place with another $3.1 million, putting it over $318 million domestically and $731 million worldwide.  It’s currently the 14th highest grossing superhero movie of all time and the eighth highest grossing film of 2016, behind fellow DCEU movie Batman v Superman: Dawn of Justice.