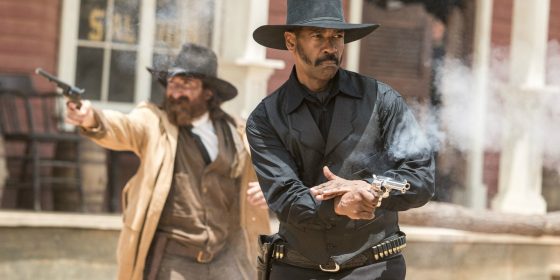 It’s time for the semi-annual “Denzel is a bad ass” movie but this time it’s a remake of one of the greatest westerns ever made, The Magnificent Seven, from Denzel’s frequent collaborator, Antoine Fuqua.

Denzel plays Sam Chisolm, a bounty hunter who’s approached by Haley Bennett’s Emma, representing the town of Rose Creek that is under the iron grip of evil industrialist/capitalist Bart Bogue (Peter Sarsgaard).  Emma wants someone to help them fight off Bogue and his men and, since he has history with Bogue, Chisolm agrees and assembles a motley crew of other gunslingers and outcasts including gambler Josh Faraday (Chris Pratt), trapper Jack Horne (Vincent D’Onofrio), sharpshooter Goodnight Robicheaux (Ethan Hawke) and his knife expert partner Billy Rocks (Byung Hun-Lee).  There’s also a native warrior, Red Harvest (Martin Sensmeier) and Mexican outlaw Vasquez (Manuel Garcia-Rulfo).  The movie spends the first third of the film introducing each of the Seven in little vignettes but there’s strangely none of them have really any specific motivation to join the group except that it’s the “right thing to do” and it’s in the script.  There’s not even really any conflict between the disparate group members besides a little ribbing and some vague mentions about the Civil War.  This is not the western for complicated character studies or deconstructions of the genre. The Seven are all extremely likable, especially, as you would expect, Chris Pratt, although he’s initially saddled with some ridiculous Nic Pizzolatto dialogue when he’s first introduced that doesn’t suit his roguish charm (and is even retconned later when he tells Ethan Hawke’s Goodnight to stop talking that way).  There could have been a little more from Peter Sarsgaard as well, as he only factors in at the beginning and end of the film and more time to hate his character would have made the ending that much more satisfying but this is an old school, slam bang western where the good guys are good and the bad guys are bad and things will get settled with six shooters and Winchesters.  Oh, it should also be mentioned that this movie features one of the last scores done by the late, great James Horner and it’s solid but it holds out on the iconic Magnificent Seven theme until the very end of the movie.

If you’re looking for gun slinging, The Magnificent Seven delivers, especially in it’s huge climactic battle.  Things may be a little too big and chaotic at times during the climax however, as it’s sometimes hard to tell who is getting killed between random townsfolk and Bogue’s men and it gets even more chaotic when a gattling gun gets introduced.  All the members of the Seven get their chance to shine, whether it’s Billy Rocks being basically a western ninja with his knives or Robicheaux getting past his Civil War PTSD or Red Harvest facing off against Bogue’s traitorous native henchman.  Some recent westerns are probably more interesting in plot or character than The Magnificent Seven but this is pretty much everything you could want from a western action movie.

This Magnificent Seven remake is much more successful than this summer’s disasterous Ben-Hur remake, also from MGM. and it’s got tons of gun slinging, dynamite exploding, dueling western action even if it doesn’t do anything new or interesting with genre.  Chris Pratt and Denzel Washington are both doing exactly what you love them to do, which is being roguishly charming and bad ass respectively and there’s some really fun supporting turns from the rest of the seven, especially Vincent D’Onofrio and Ethan Hawke.  If you’re in the mood for some western action, I would say this is one to check out.