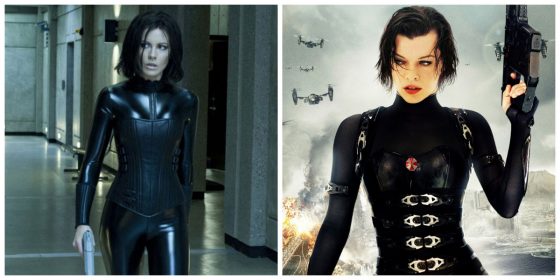 The Underworld and Resident Evil franchises are super similar in a number of ways; leather clad, ass kicking heroine, Matrix rip off sequences, inexplicable number of sequels and giant CG monstrosities, both put out by Sony and the lines will blur even more when the next entries in both series hit within a few weeks of each other in January of next year.  Resident Evil is finally ending with The Final Chapter, where Milla Jovovich’s Alice is the only one to survive the last stand that was set up in Washington DC at the end of Retribution and heads back into the apocalyptic wastelands but finds out from a resurrected Red Queen that Umbrella has an airborne cure for the T-Virus back in The Hive under Racoon City, the location of the very first Resident Evil movie.  Gathering a squad of survivors including Ali Larter’s Claire Redfield, Alice gears up for one final battle against Umbrella and the undead hordes.

Meanwhile in the Underworld franchise (which is not ending as of yet), Selene (Kate Beckinsale) is the target of a conniving vampire and the new leader of the Lycans, Marius, who want her blood and the blood of her missing daughter to increase their powers.  In order to stop them, it appears she goes through some sort of ritual to become even more powerful and teams up with Theo James and Charles Dance to try and end the war once and for all.  There’s something about the Underworld franchise where everything just blends together and this one looks no different than the four movies prior, except maybe three since it was prequel.

Resident Evil: The Final Chapter is out on January 27, 2017 and Underworld: Blood Wars kicks off 2017 on January 6th.

The War Between Lycans and Vampires Continues in Underworld: Blood Wars (Trailer)