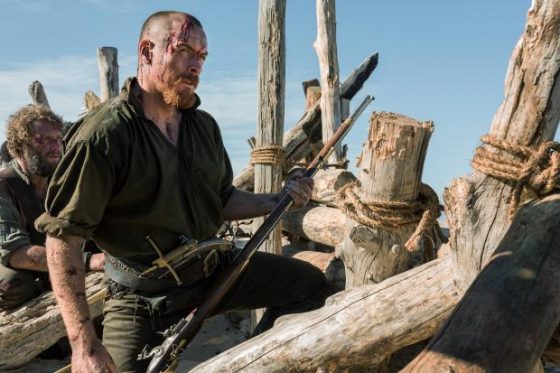 The upcoming fourth season of the Michael Bay produced pirate drama Black Sails will be it’s last and the final battle for Captain Flint (Toby Stephens) and his pirate allies against British oppression will be begin.  Last season (spoiler alert), Nassau was retaken by British forces under the command of a new governor, Woodes Rogers (Luke Roberts), who managed control the citizens of the island with his main advisor, Eleanor Guthrie (Hannah New), who agreed to work against her former allies in exchange for escaping prison.  The biggest blow Rogers handed the pirates was executing Charles Vane (Zach McGowan) but it forced the pirates to double their effort to undermine the new British rule and create the new legend of merciless pirate leader, Long John Silver (Luke Arnold). Flint’s forces also managed to fend off a British attack on their island base with the help of Blackbeard (Ray Stevenson) and his fleet.  The final season looks to continue all that setup with Flint, Blackbeard, John Silver, Billy Bones (Tom Hopper), Jack Rackham (Toby Schmitz) and Anne Bonny (Clara Paget) fighting for not just the freedom of Nassau but the total defeat of Britain and it also potentially get the characters into place for how we know them when Treasure Island begins (as Black Sails is the gritty prequel to Robert Louis Stevenson’s classic novel).  The final season begins on January 29th and you can check out the trailer below.