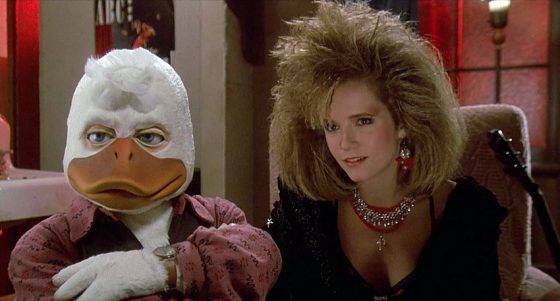 Back in the dark days before the MCU, and even before movies like Tim Burton’s Batman and Blade, the big Marvel comics adaptation that hit theaters in 1986 was Howard the Duck.  Produced by George Lucas, the movie took Marvel’s strange duck alien who wanders the fringes of the Marvel Comics universe fighting strange creatures and occasionally teaming up with main Marvel characters like Spider-Man.  The movie has no ties to the Marvel universe and instead features Howard (Chip Zien) being flung to Earth from the distant planet of Duckworld and meeting rocker Beverly (Lea Thompson) and eventually saving the planet from an evil alien species called the Dark Overlords from invading the planet.  Beverly fronts the band The Cherry Bombs and their are several musical performances in the movie, including the one we’re highlighting here that is the triumphant finale and has the title song Howard the Duck.  Thomas Dolby, of “She Blinded Me With Science” fame, wrote the movie’s songs and co-wrote “Howard the Duck” with George Clinton while Lea Thompson did all of her own singing.  Check out the song in context of the movie below.