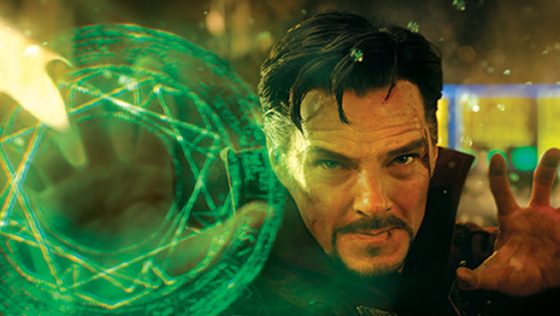 The Thor movies have taken some baby steps into the magical world of the MCU but now the Sorcerer Supreme is here for deep dive into Marvel’s magical multiverse in Doctor Strange.

Benedict Cumberbatch stars as Dr. Stephen Strange, a brilliant but arrogant surgeon in NYC who is involved in a horrific car crash that destroys the nerves in his hands.  Desperate for a way to heal them, Strange eventually ends up Kathmandu and Kamar-Taj, the home of The Ancient One (Tilda Swinton), who, agrees to teach Strange the mystic arts, which will heal his hands in the process.  While Strange trains, Kaecilius (Mads Mikkelsen), an ex-student of The Ancient One, is trying to perform a ritual that while open Earth up to The Dark Dimension and it’s ruler, Dormammu.  The main job of Doctor Strange is to try and introduce the insane world of magic that has existed in the comics to the MCU and, as such, it doesn’t have the strongest plot or character development of the franchise.  Characters like Kaecilius and Mordo (Chiwetel Ejiofor) are not fleshed out as much as they could have been, despite the incredible actors inhabiting the roles.  Mordo will be back in a probably more substantial way in the eventual sequel but he feels a bit like how Sinestro was handled in the Green Lanter movie, although much better than that garbage fire of a film.  Rachel McAdams is also good but doesn’t have much to do either except be bewildered by all the magical craziness that happens all at once when she’s reunited with Strange midway through.  Cumberbatch is pretty great as Strange, although his choice to have a New York accent does not 100% work but you do get used to it after a while.  His arc is similar to Tony Stark’s in the first Iron Man movie but, although it didn’t seem possible, Strange is possibly even more of an asshole than Tony and he’s still kind of a dick even after saving the world.  I’m not a hardcore Strange fan, so maybe that’s accurate to the comic.

The characters and plot may just be fair to good for the MCU but the visuals of the movie are unmatched in the universe.  Doctor Strange is absolutely jaw dropping pretty much from the beginning and there’s things you’ve never seen before in not just the MCU, but movies in general.  There is an incredible sequence mid-way through where Kaecilius is chasing Mordo and Strange through the “Mirror Universe” of NYC and he’s manipulating building into folding in on themselves and shifting the entire world around and it makes Inception look like a high school stage play in comparision.  The coolest sequence, in my opinion though, is a late movie action sequence where Strange has reversed time to prevent something from happening and he, Mordo and Kaecilius are going forward normally while the world is going backward around them and they have to avoid buildings rebuilding, cars unexploding and it’s incredible.  The visualization of the use of magic is really cool as well, with everything building seals in the air or being some sort of lightning type effect and there’s stuff like Strange’s classic Eye of Agamotto and Cloak of Levitation that get cool updates for the movie universe.

Civil War set a bar this year for the MCU that may be impossible to top and, while Doctor Strange doesn’t quite get there, it’s still a great intro for one of Marvel’s most classic and craziest characters and takes the entire universe to the next level with it’s intro of magic and multiple universes and I can’t wait to see how the other MCU heroes interact with Doctor Strange going forward.