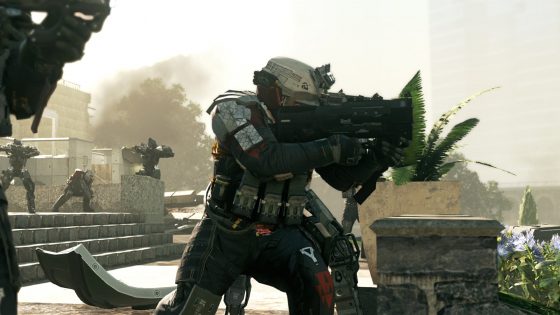 We’re knee deep in the big holiday game releases and most of them are big first person shooters but there were a few other games we got to check out as well.

Call of Duty: Infinite Warfare: After last year’s disasterous Black Ops 3 that was both an insult not only to the previous two Black Ops games but the franchise in general, Infinite Warfare is a 180 and delivers, what I think, is one of the best campaigns since the Modern Warfare era.  You play as Nick Reyes, who after a devastating attack on Earth’s new government hub in Geneva in the distant future, becomes captain of the Retribution space carrier and has to take the fight to the Settlement Defense Front, who masterminded the attack.  You start out doing the linear, bombastic Call of Duty missions but once you have control of the Retribution, you can pick and choose what missions you want to take on next, which definitely makes you more engaged and adds to the feeling to being the captain of this ship.  The characters are also some of the best since the likes of Soap and Price, with your robotic ally Ethan being one of the standouts and your loyal second in command Salter being great as well.  As far as the big budget guest stars, Kit Harrington is the evil head of the SetDef forces, Koch, but David Harewood of Supergirl also shows up as the head of the Marines on your ship.  Along with the standard on the foot fighting, you’ll spend a lot of time in the cockpit of your Jackal fighter ship, where you’ll dogfight SetDef fighters and take on capitol ships.  It’s not as in depth as something like TIE Fighter or other space sims from back in the day but it’s much more fleshed out than the on the rails vehicle missions of previous COD games.  80’s Zombies is also pretty fun and offers up a bunch of new items and collectibles and some great tunes offered up by DJ David Hasselhoff.  I have not jumped into multiplayer yet but I’ve heard it’s very similar to Black Ops 3’s multiplayer last year.

Battlefield 1: I rented Battlefield 1 to check out the campaign and it’s easily the best single player Battlefield has ever had.  It takes the form of basically a short story collection and you hop between different characters in different theaters of the war and play through a few chapters where your character goes through a specific battle or a few key events.  Each character is based around either a class or vehicle so it’s also essentially giving you a bit of training for multiplayer.  The game looks absolutely incredible and gives you a real sense of the vicious slog that was World War I, as you fight through mud caked trenches and your guns become covered in mud.  Much like Black Mirror, all the stories are good but some definitely stand above the rest, like playing as an Italian infantryman in a full suit of armor or a brash American fighter pilot battling German planes and zepplins.  Some of the levels also really use the openness of Battlefield, as you’ll get a few different objectives on a massive map and it’s up to you how you want to proceed.  If you love Battlefield’s multiplayer, this is probably a must buy but it’s definitely worth at least a rent to check out the campaign.

Titanfall 2: I completely missed the first Titanfall due to it’s exclusivity on Xbox but now that Titanfall 2 is on all platforms, I was able to check out the campaign, which is new to the series.  I was kind of blown away by the movement of your pilot, Jack Cooper, and there’s sections of the game that is basically Prince of Persia with a gun.  There’s a standout level where you get a device that allows you to time travel between the present and the past and you have to use that to solve environmental puzzles as well as get the drop on enemies, who constantly chatter about this mysterious pilot who keeps disappearing.  Combat feels excellent as well and you feel like some sort of gun wielding ninja and it recalls how in Doom earlier this year you had to constantly keep moving.  Personally, I didn’t think the Titan combat worked as well as the on foot combat, as I never really felt like I was moving as efficently as maybe I should have been and it just felt a tad clumsy after being on foot and wall running above a group of enemies, dropping into a slide and taking them all down before your slide ends.  The voice acting is pretty great between Jack and his Titan, BT and, while it’s not the most in depth dialogue system, it’s nice to be able to choose a response to BT and build a bond.  I didn’t get a chance to play any multiplayer but I’m very intrigued to maybe pick up the game during Black Friday because the single player felt so good.

Call of Duty: Modern Warfare Remastered: If you pony up for the aforementioned Legacy Edition of Infinite Warfare, you’ll get the remastered version of the game that really kicked things off for COD, Modern Warfare.  It still holds up even after almost 10 years since it’s release, with missions like the opening ship raid or the stealthy sniper mission All Ghillied Up being standouts even compared to everything that came after.  The remaster is great and it makes it feel like how remember it, even though if you went back to the non-remastered version it would probably be pretty jarring.  One thing that does not hold up is some of the voice acting.  Soap and Price and the SAS crew are great but some of the voice acting during the Marine sections early on are extremely rough, as this was before the likes of Kevin Spacey, Michael Keaton, Ed Harris, Keith David and Ice Cube came on board.  I know most people were wishing this was available separate from Infinite Warfare but that game is excellent enough I think to justify bumping to the Legacy version.

Earth’s Dawn: In case you want your action more horizontally oriented, Earth’s Dawn recently hit PS4 and it’s a side scrolling action game with a ton of customization options.  You play as a cyborg soldier in the future who is part of the effort to fight off an alien invasion.  Your soldier has a melee weapon and a gun and you can use them in tandem to build up combos and fight off the various alien creatures.  It has a really great anime style and it’s all in Japanese with English subtitles.  After the first few missions, you get the choice of a bunch of different side missions or continuing the story but some of the side missions have enemies that are insanely difficult, so it seems like you need to grind and build up your weapons before taking them on.  There are tons of elements and items you collect that you can use to build and enhance your weapons and there’s a massive skill tree that you can use to customize how your soldier fights.

Mallow Drops: For a break from all that crazy action, we also have the cutesy puzzle game Mallow Drops.  Despite it’s cutesy look, it’s actually a pretty tricky puzzle game, where you have to rotate the world to move blocks and then move your bird character around to collect eggs to complete the levels.  It’s easy to understand but it can get complicated fast as you try and get your bird character into the proper position, as they can only move in one direction at a time and they keep moving until they hit a wall.  It’s available on Steam right now and if you’re into puzzle games, it’s worth checking out.

Lego Dimensions: Although it might seem like this is a Late to the Party game, there’s actually a ton of new figures and level packs coming out, so it might actually be a great time to jump into the Lego Dimensions world.  The starter pack is also on sale for $40 at Target and I believe some other retailers for Black Friday, so that’s why I finally jumped in.  If you’ve liked any of the previous Lego games, you’ll enjoy this game, as the smashing everything gameplay and puzzle solving is the same and still enjoyable.  The big thing for Dimensions though is the mashup quality of it, as your starter team of Batman, Wyldestyle and Gandalf make their way through a bunch of different Lego worlds, like Wizard of Oz, The Simpsons, Doctor Who and more while battling a motley crew of villains like Joker.  Battling a giant mecha Joker while inside Mr. Burns’ office at the nuclear plant is just a fun, crazy blast.  I’m definitely interested in some of the other level packs, like Back to the Future and Mission Impossible, but the main Starter Pack has a ton of stuff to do by itself.