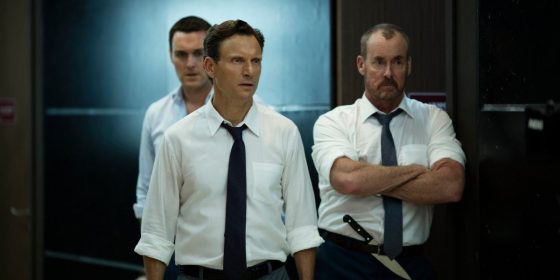 Director James Gunn has been trying to get The Belko Experiment made for years and it’s finally come to fruition for next year.  Gunn wrote and produced the movie while Greg McLean, who directed Wolf Creek, directs and it follows the office drones of the Belko Industries, a non-profit company who facilitate American companies coming to South America.  A message plays over their intercom that they each have to kill three of their co-workers or else double the number will be killed for them.  Steel plating seals up the building and armed guards are posted outside and eventually the office workers realize they’ll have to go through with whatever is going on.  Tony Goldwyn, John Gallagher Jr., Adria Arjona, Michael Rooker, John C McGinley, Sean Gunn and Melonie Diaz star.   It looks like a crazy, fun genre movie and it’s out on March 17th next year, check out the Red Band trailer below.

Daniel Radcliffe is Not Welcomed to the Jungle (Trailer)