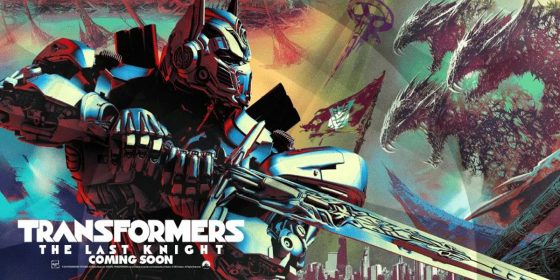 Even though it was a mind numbing garbage fire of a movie, Age of Extinction made tons of money, as all the Transformers movies have.  In fact, the whole franchise has made so much money that it gave Paramount the gall to create a cinematic universe, with spin-off movies and more on the way.  They also gathered a team of writers and contributors, including people like Robert Kirkman and Zak Penn, to help establish the new connected universe going forward.  Next summer’s Transformers: The Last Knight is the first movie in this brave new continuity and the first trailer is here.  Plot details are pretty much non-existent right now but what we do know is that this movie sets up the fact that Transformers have been coming to Earth since the Middle Ages and Optimus Prime returns from space kill crazy, even against his fellow Autobots.  Mark Wahlberg’s Cade Yeager is back and teamed up with Josh Duhamel, Tyrese Gibson and John Turturro from the first three films and there’s some sort of mercenary force out to destroy all Transformers called the Transformers Reaction Force and Anthony Hopkins has somehow been convinced to show up as well.  As far as new Transformers, the biggest addition is Hot Rod and hopefully the Dinobots will actually get to do something this time instead of appearing in the last 5 minutes of an almost 3 hour movie.  Expectations could not be lower but the odd numbered movies in this series have been the better ones, so that’s the only glimmer of hope. The movie is out on June 23rd next year and you can check out the trailer below.