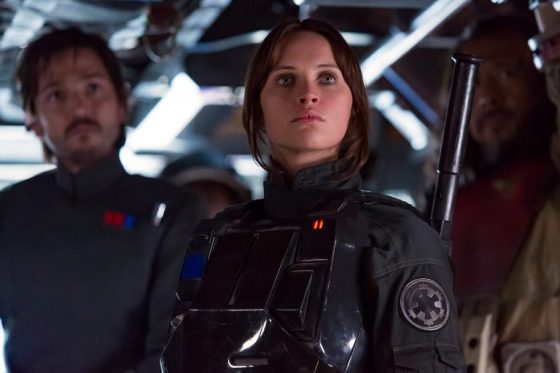 Surprising no one, Rogue One decimated the box office with the second highest ever opening for the Star Wars franchise, although it was about $100 million off from The Force Awakens’ insane opening last year when it made $247 million for it’s opening weekend.  Rogue One took in $155 million and $134 million internationally for over $290 million total gross.  It’s already the 15th highest grossing 2016 film in three days and it’s 12th highest opening of all time.

Moana dropped to second and was a very distant second at that with $12.7 million, putting it over $162 million for it’s four weeks out

Office Christmas Party went to third place with $8.5 million, putting it up to over $31 million for it’s two weeks out but it’s got direct competition over the holiday weekend from Why Him?

Collateral Beauty, widely considered one of the worst movies of 2016, if not all time, was the lowest opening ever for Will Smith with only $7.1 million.  Even movies like Seven Pounds that were considered Smith duds made almost double what Collateral Beauty made

Fantastic Beasts rounded out the top 5 with another $5 million, putting it over $207 million total but still $40 million off from the lowest performing entry in the mainline Harry Potter series.