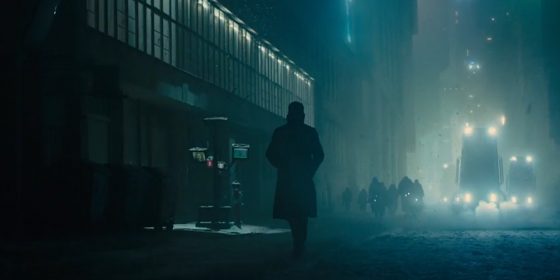 Although many would argue the original Blade Runner is a perfect film that doesn’t need a sequel, Ridley Scott is guiding a return to his dsytopian future with Arrival director Denis Villeneuve at the helm.  Ryan Gosling plays a new Blade Runner agent in the year 2049 (thirty years since the first movie), K, who uncovers a long buried secret and needs to original Blade Runner Rick Deckard (Harrison Ford) before the secret gets out and plunges society into chaos.  This is a very brief tease but it looks like Villeneuve is able to match the visual style of the original and introduces a new arid environment (maybe Mars?) where K finds Deckard hiding out.  Besides Ford and Gosling, Dave Bautista, Robin Wright, Mackenzie Davis, Jared Leto, Lennie James and Ana de Armas are starring as well.  Will the definitive answer about Deckard’s true nature be revealed?  We’ll have to wait until October 6 next year but you can check out the teaser below.