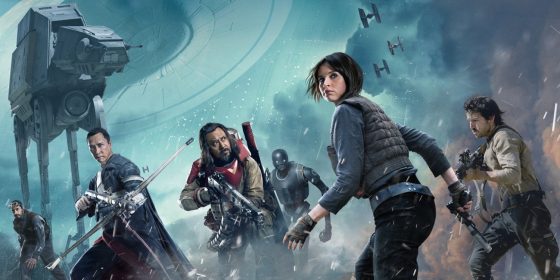 As the first Star Wars Story, Rogue One sets the tone for what we can expect every other year from now until eternity with Star Wars but, if every Star Wars Story is as good as this, I’m definitely 100% in.

Rogue One takes place shortly before A New Hope as the Empire is completing the Death Star.  Gallen Erso (Mads Mikkelsen) has been one of the main scientific heads behind the project but secretly wants to bring it down and gives a message to defecting Imperial pilot Bodhi Rook (Riz Ahmed) to get to Rebel leader Saw Gerrara (Forest Whitaker) and his daughter, Jyn (Felicity Jones).  Jyn is broken out of Imperial custody and paired with Rebel agent Cassian Andor (Diego Luna) and his reprogrammed Imperial droid K2SO (Alan Tudyk) to find Gerrara and verify the message.  Along the way, they run into warriors Baze (Wen Jiang) and Chirrur (Donnie Yen) and the motley crew eventually needs to lead an assault to steal the Death Star plans.  The movie spends a lot of the opening introducing the characters and it does drag a little until the full team is assembled but none of them are as instantly lovable as Finn or Rey or Poe from The Force Awakens, possibly because this movie is easily the most serious and gritty movie in the franchise and the characters are not constantly cracking wise due to the seriousness of the situation.  There’s definitely comic relief, mostly from K2SO who describes everything in the most literal and tactless way possible, but most of the Rogue One team is dealing with some heavy stuff.  Jyn and Cassian are definitely the pair who get the most focus, which unfortunately puts the awesome Donnie Yen and Wen Jiang a little bit in the background but everyone gets at least one big hero moment, especially during the climactic final battle on the tropical planet of Scarif.  The one character that doesn’t really click is Director Krennic, played by Ben Mendelsohn.  He’s like many of the villains in the neighboring MCU, servicable but not really memorable and he’s mainly just a sniveling Imperial weasel.

Speaking of the final battle, it’s easily one of the greatest sequences ever put on screen in Star Wars and takes up almost the entirety of the third act.  It has tons of exciting moments but also emotional stakes as it’s the first major battle where the Rebellion comes together to show the Empire they are not going down without a fight but it could also end it in one swift motion as well.  The tropical setting is a fantastic change of pace from the deserts and ice worlds we’ve seen a lot of in the Star Wars universe and director Gareth Edwards expertly cuts between the land and space battles.  Much like how he teased in Godzilla, there are a few smaller skirmishes before hand but Edwards saves everything for the ending and it’s incredible.

For hardcore Star Wars fans, there’s tons of Easter eggs and cameos from characters like Bail Organa and Mon Mothma all the way down to Dr. Evizan and Ponda Baba.  The appearance that is drawing the most criticism is Grand Moff Tarkin, who is a CG recreation of the great Peter Cushing and, going in, it seemed like it was going to be an abomination but I did not find it too distracting.  Yes, it’s obviously CG but it doesn’t bring the movie to a halt like some early reviews were claiming.  There’s also Darth Vader as well and there’s just enough of the Sith Lord where he doesn’t take over the movie but does have one of his most terrifying moments in the franchise.  Gareth Edwards even found ways to use old A New Hope footage that wasn’t used to incorporate characters like Red and Gold Leader from the soon to be fought Battle of Yavin.

If future Star Wars Stories follow Rogue One’s example, then we are in for some fantastic tales in the near future.  It fills in backstory that we actually care about and introduces a grit and morally gray tone that we’ve seen before in some of the Expanded Universe material but never in the movies until now.  If you’re a Star Wars fan, this is a must watch.