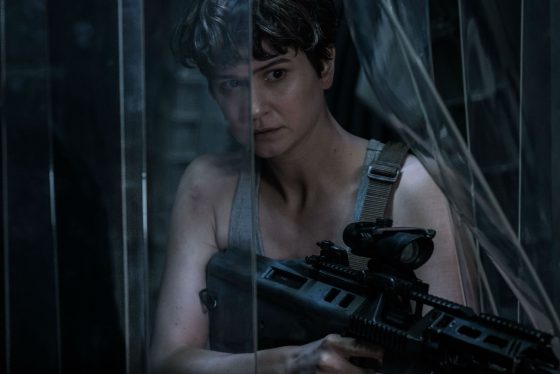 After the gorgeous looking but ultimately disappointing and confusing Prometheus, it seems like director Ridley Scott is giving us exactly what we wanted from the Alien prequels with Alien: Covenant.  Picking up from Prometheus but tying directly into Alien, Covenant finds the crew of the ship of that same name finding a seemingly uncharted paradise of a planet but they not only discover Michael Fassbender’s android David, but a nest of Xenomorph eggs and possibly other new evil creatures as well (There appears to be some sort of spores that may lead to more than an upset stomach).  The cast includes Katherine Waterson as Amy Daniels, who seems to be very much setup as the Ripley of this movie, and also Danny McBride, Billy Crudup and Damian Bechir.  Also, this movie looks like it’s going to be a hard R with what looks like an Alien bursting out of someone’s back and an Alien cockblock while two of the crew members have sex.  It looks way better than Prometheus already and feels like the Alien continuation we’ve been waiting for since Aliens.  It’s out on May 19th and you can check out the Red Band trailer below.