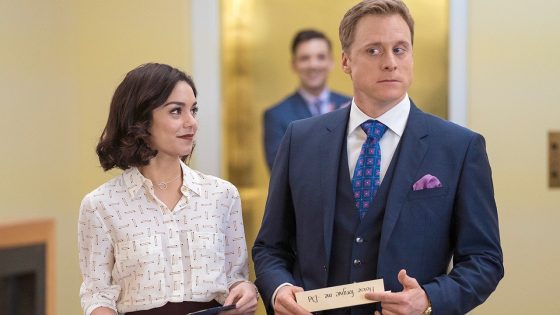 NBC tried to get into the DC universe with Constantine but cancelled it but they are trying again in February with a new comedy set in the DC Comics universe, Powerless.  When it was first announced, the show was said to be set at an insurance company dealing with superhero related claims but that has completely changed and now it follows the employees of Wayne Security, an off-shoot of Wayne Enterprises headed up by Bruce’s douchey cousin Van Wayne (Alan Tudyk), where they manufacture gadgets to protect every day civilians from the collateral damage caused by superpowered battles.  Vanessa Hudgens plays an ambitious and optimistic new employee who wants to help change and protect the world and she’s joined by Danny Pudi and Ron Funches as fellow employees.  There are some deep cut references, like Starro fighting in the background of Hudgens getting ready for work and jokes referencing Superman and Wonder Woman.  It seems like it might be worth at least watching the first few episodes to see how deep down the comic rabbit hole they go and if it’s actually funny and we’ll find out on February 2nd when it premieres after Superstore.  Check out the trailer below.