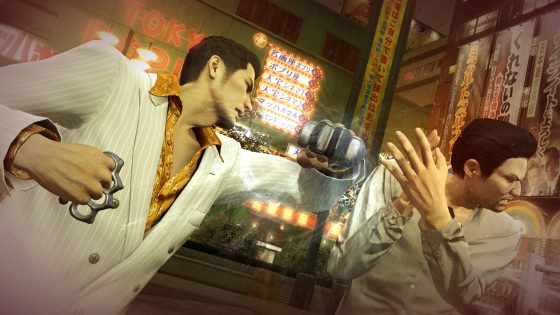 It’s been a while but we’re back with another edition of Gamebox 2.0 and have a ton of games we’ve gotten the chance to check out recently, so let’s dive right in.

Yakuza O: (Chris) Sega presents the honorable and wacky world of Yakuza to the PS4 this month, making it the seventh game in the long running Yakuza series. Yakuza 0 is a action adventure game and serves as the origin story of the series main protagonist Kazuma Kiryu, the Yakuza with a heart of gold and fist of steel and his rival Goro Majima, a punished Yakuza with a burning passion to find an worthy opponent. Taking place in 1988, Yakuza 0 reintroduces Kiryu as a fresh face Yakuza and Majima as a Takuza that has been sent on probation. The game begins with Kiryu taking orders from his mob superiors and working low level grunt work. One night after completing a debt collection, Kiryu is framed for a murder and has to break ties with his Yakuza clan in order to figure out who set him up and why. Utilizing his wits, his friends and devastating fighting styles, Kiryu searches the streets of Kamurocho for answers and occasionally knocking out anyone that stands in his way. The other part the game is told through the perspective of Majima, working as a manager for a night club and doing odd jobs for the Yakuza to earn back his title within his clan. Majima duty of maintaining a night club and dealing with shady business owners will eventually lead him to cross paths with Kazuma Kiryu.

I have played through the original Yakuza on the PS2 years ago, and had only briefly played the later games, so it was refreshing to re learn the characters and get back into the world of Yakuza. Fans of the series will enjoy the new perspective of the feared “Dragon of Dojima”, starting off as mob muscle and fighting his way with the ranks of the criminal underworld. Some characters that would appear in other games are present and establish how Kiryu/ Majima are first introduced to them. The Yakuza series is an interesting mix of a romanticize Yakuza culture and the wackiness of a Japanese game show. There are parts that play out like a Yakuza soap opera, and then there are side missions that make you help a Dominatrix improve her self esteem. Interesting mix right?

The game retains the open world design that allows the player to move the story at their own pace and explore the surroundings to discover battles and mini games. The classic beat’em up combat game play the series is known for since the PS2 era (Which could be a neat retro vibe for some fans) is back with new fighting moves and the ability to switch fighting styles during combat. Both Kiryu & Majima each have 3 fighting styles to use and level up, so prepare to sink in some game time to get them both transformed into perfect fighting machines.

Yakuza 0 doesn’t feel like innovation, but the game play is fun all around. The main story line is interesting and is a cheesy soap opera to watch, but stands out from a lot of similar games released in America. The combat does get repetitive, but every encounter gets you more money to level up your experience. The original Japanese voice acting  and ambient city sounds are not dubbed, and this adds to the immersion of being in the akuza world. The game encouraged me to build up Kiryu & Majima states to get the most out of my time to complete mini games and survive fights in the streets (Especially attempted muggings from aspiring martial artist).  Gamers that are looking to occupy the time before the Shemune 3 releases should definitely pick up Yakuza 0 and anyone looking to start the series could begin here as well.

Rise of the Tomb Raider: Coming out in 2015 on Xbox One and PC, Rise of the Tomb Raider finally arrived on PS4 last year in basically a Game of the Year edition that also celebrated 20 years of Tomb Raider.  This time around, Lara is off to Siberia to try and track down the Divine Source, which may be the key to immortality but evil fanatics Trinity are after it as well forcing Lara to use the combat skills she forged in the first reboot game to take them down.  The game builds on the already incredible Tomb Raider from 2013 with even more Arkham/Metroid style progression as Lara gains more gear that lets her access more areas of the map and also solve the many optional tombs, some of which are genuine head scratchers.  The PS4 version has a ton of additional guns and outfits to equip Lara in and features DLC like the Baba Yaga mission set and a fight against zombies in an old Soviet base.  For me, I think Uncharted 4 edges this out by just a sliver but this is still an incredible game that is worth getting on whatever system you have and hopefully there’s more on the way.

Let It Die: Released during last year’s Playstation Experience, Let It Die is the latest crazy/awesome game from Suda51 that is sort of Dark Souls/Bloodborne but with a much more fun sense of humor.  Guided by skateboarding grim reaper Uncle Death, you control a fighter trying to ascend up a mysterious tower that rose up in a post-apocalyptic Japan that holds a potential world altering secret on it’s top floor but you’ll have to fight through 40 floors of traps and monsters to get there.  The game is free to play and it’s incredibly full featured, with raiding other players games along the main game of battling your way up the floors.  There are some items to purchase but the game is not intrusive about them at all and you probably won’t need to spend any money to enjoy the game.  It’s jam packed with Suda’s wacky sense of humor and it’s probably one of his best playing games as well so, if you have a PS4, you should definitely at least give it a shot since you have literally nothing to lose.

Minion Masters: Currently in Early Access on Steam, Minion Masters combines two popular gameplay styles, CCG battling and MOBAs into one fun experience.  You control a Master, of which three rotate as free monthly and you can pay to unlock others, and then you battle another Master in a one on one duel.  You have a deck of different attacks and creatures and you have a mana bar that is constantly filling and each card has a certain level that needs to be reached before it can be played.  You play creatures and the goal is to attack and destroy your opponents base.  It’s super fast paced and fun and features a great blend of sci-fi and fantasy creatures as you can send space marines in alongside dragons and orcs.  If you like things like Hearthstone or DOTA/League, this one is definitely worth checking out.

The Walking Dead: A New Frontier: The new season of The Walking Dead from Telltale arrived late last year and switches things up by still featuring Clementine but not making her the main playable character.  Instead, you’ll control new character Javier, who’s family is split apart in the early days of the outbreak and he’s left to protect his sister-in-law, nephew and niece.  If you’ve played the prior two seasons and miniseries, you know what to expect here: gut wrenching choices, horrific developments and fantastic writing.  There’s a little bit of the dynamic of the first season back here as, as Javier, you have people you need to look out for which may influence your choices and Clem has become even more bad ass, as she’s had to survive some terrible things since the end of Season 2.  I’ve only played the first episode so far but it’s prime Telltale Walking Dead, so if you’ve enjoyed the prior seasons, this one is a no brainer.

Retro Winter Sports 1986: Get an early jump on the Winter Olympics 2018 hype by flashing back to the 80’s with mobile game Retro Winter Sports 1986.  A throwback to old school sports games like Track & Field and especially Winter Games on the NES, Retro Winter Sports is a collection of events that includes biathlon, curling, ski jump, slalom, bobsledding and speed skating that you control with various dual thumb gestures.  It takes a little bit to get used to the controls, especially in something like curling, but they are all fun once you do get the hang of it they really do a great job of harkening back to those old PC/NES sports collections.  It’s available right now on both iOS and Android.

Rise & Shine: The latest from publisher Adult Swim Games, Rise & Shine is a side scrolling shooter that puts you in the shoes of Rise, a young boy living on Gamearth, which is populated by analogs to old school gaming characters like Link and Mario, that is being invaded by the forces of the Space Grunts, who basically represent the modern day Gears of War/COD/Halo side of gaming.  Coming into possession of the magical talking gun Shine, Rise has to seek out a magical item that can stop the invasion and save his planet.  The gameplay is old school running and gunning with a cover mechanic but there’s also environmental puzzles involving Shine’s remote control bullets.  You have to get used to and excel at this mechanic very quickly because it will be impossible to progress far without mastering it as you need it to move past areas and defeat certain enemies and bosses.  The game is also pretty brutal difficulty wise right off the bat but it looks fantastic and the world is just too cool not to get into.  It’s definitely worth checking out on Xbox and PC right now.

Luke Sidwalker: Kind of more of an interactive joke than a game, Luke Sidwalker is a satrical take on living in New York City as you guide the titular hero through various neighborhoods of the city and avoid the various denizens on the street, like yoga moms, hot dog vendors, hipsters, tourists and more.  The gameplay is incredibly simple as you just move arround with the arrow keys and you have a few uses of an “Excuse Me!” button that clears out people around your general area but that’s about it.  If you actually live in NYC, you’ll probably understand the references and get a kick out of how the various areas are portrayed and the reasons Luke has to travel through each one but all of that really went over my head having only visited NYC a few times.  It’s on Steam if you want to check it out.