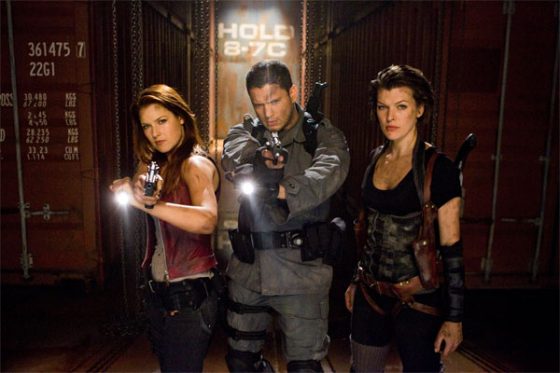 The Resident Evil series comes to a close with The Final Chapter this weekend and our Franchise Flashback feature is back after a long hiatus to run down the previous movies in the series. 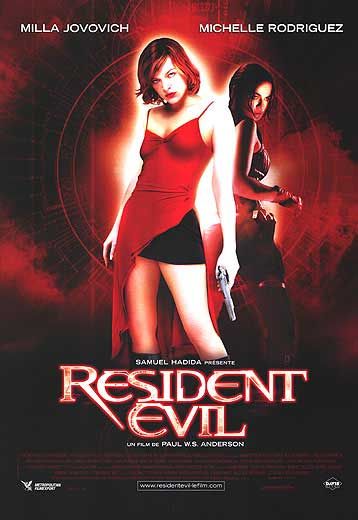 Resident Evil (2002): The first entry in the series introduced amnesiac heroine Alice (Milla Jovovich), who we find out worked for the evil Umbrella Corporation as a security officer above their secret facility, The Hive, where the deadly T-virus is being developed.  Alice made a deal with Matt Addison (Eric Mabius) and his sister Lisa (Heike Makatsch) to expose Umbrella but Alice’s fake husband/partner Spence (James Purefoy) steals the T-Virus and it’s cure and wipes out The Hive with the virus.  A special forces team led by Shade (Colin Salmon) and featuring Michelle Rodriguez’s Rain arrive but they are gradually taken out by zombies, the Red Queen AI and other creatures but Alice and Matt escape on a train but are captured by Umbrella scientists, with Matt being turned into Nemesis from the game of the same name and Alice being given her special abilities that she has for the rest of the movie.  There are a few specific nods to the game in this first movie besides the very loose adaptation of the original games plot, like skinless zombie dogs and the Licker creature.  This movie has the most traditional zombie action, with a ton of extras shambling around Romero style.  The coolness of the series peaked here however, as they have never been able to top the amazing laser corridor sequence that was so good, they recycled it multiple times in the movies and even got put into Resident Evil 4. 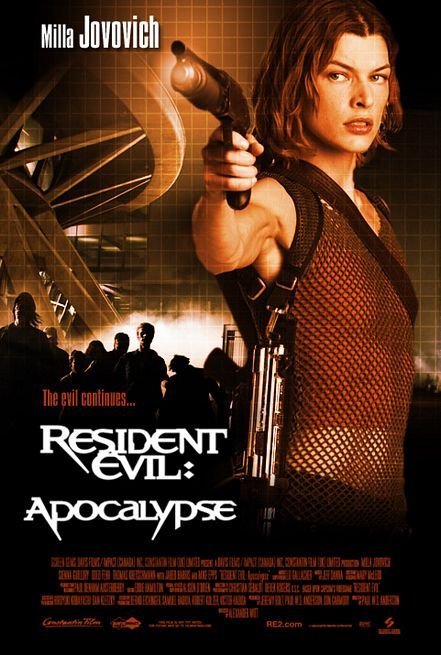 Resident Evil: Apocalypse (2004): Sort of combining some of the plot of Resident Evil 2, Resident Evil: Nemesis and Code: Veronica, the action takes place in Raccoon City with Alice waking up in the hospital and trying to survive the undead hordes and the Umbrella quarantine around the city.  The first major game character shows up in the form of Jill Valentine (Sienna Guillory) and Carlos Olivera (Oded Fehr) shows up as well and all the characters team up to find and deliver Angela Ashford, the daughter of an Umbrella higher up who is trapped in the city.  Dr. Issacs (Iain Glenn), the main villain of the series alongside game villain Albert Wesker, shows up here and unleashes Nemesis against the group

but Alice now has Matrixesque abilities and manages to reach Matt within Nemesis’ mind and he protects Alice from Umbrella forces while they try to escape by chopper but a nuclear bomb detonated by Umbrella crashes the chopper and Alice is seemingly killed but resurrected by Dr. Issac at a Detroit Umbrella facility.  Carlos, Jill and other survivor (and comic relief) LJ (Mike Epps) show up pretending to be Umbrella employees and take Alice but “Project Alice” is activated and Alice is secretly now being controlled by Issac. 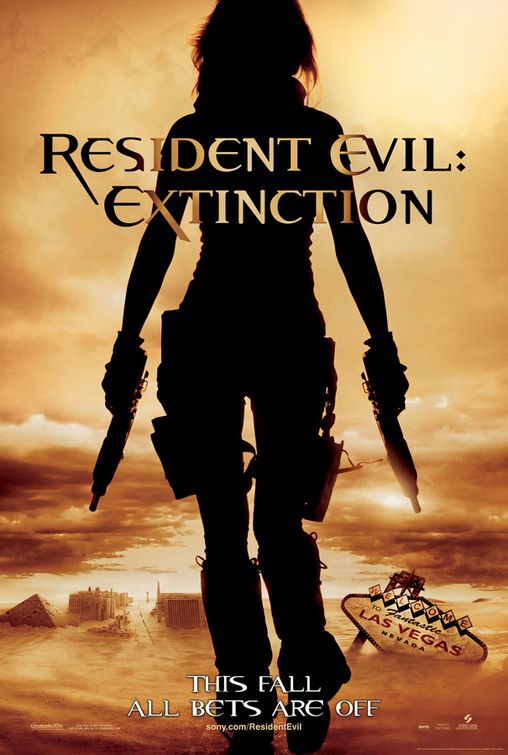 Resident Evil: Extinction (2007): Extinction is the movie when things start to get nuts in the Resident Evil movie universe.  Despite nuking Racoon City, the T-virus spreads across the planet, not only mutating most of humanity but also destroying the environment and turning most of the world into a barren wasteland.  This is also the movie that introduces the fact that Umbrella is manufacturing Alice clones to try and create the ultimate biological weapon after the failure of Nemesis.  Alice is on her own Mad Max style at the beginning of Extinction but quickly runs back into Carlos and LJ, who have now joined up with a convoy led by another game character, Claire Redfield (Ali Larter), although she’s nothing like her game equivalent. This is also the first full appearance of Wesker in the movie universe, although weirdly in this movie he’s played by Jason O’Mara but in the rest of films he’s played by Shawn Roberts. The group is traveling through Nevada and eventually roll through Las Vegas looking for gas. Dr. Issacs has gone rogue against Umbrella and tries to kill the group with troops and zombies and also eventually turns into a Tyrant and battles Alice in another Umbrella facility after she gets Claire and the survivors onto a chopper bound for Alaska, which may be infection free.

Defeating Issacs in a replica of the laser corridor from the first movie, Alice finds her clones and decides to form a squad of herself and attack Umbrella head-on. 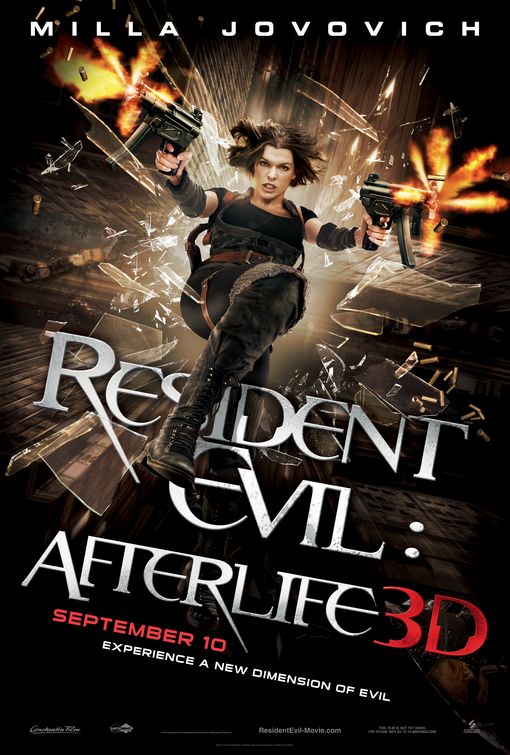 Resident Evil: Afterlife (2010): After testing the waters of ripping off The Matrix, the opening of Afterlife goes full Matrix with Alice and her clones attacking Wesker at the Umbrella HQ in Tokyo.  Battling to the man himself, Alice is injected by Wesker with a serum that removes her abilities and they crash together in a plane.  Six months later, Alice finally arrives in Alaska but can’t find Claire and her group.  She eventually finds Claire but she has a device that is mind controlling her and she attacks Alice.  Alice destroys the device but Claire suffers amnesia.  The duo fly off tracking the signal of a safe haven ship called the Arcadia and crash land in the ruins of LA onto a prison that is host to a new group of survivors, including Claire’s brother Chris (Wentworth Miller), who has been locked up.  After a horde of zombies starts breaking through the gates, the group has to figure out a way to escape and Chris knows a way out through the sewers under the shower room.  Alice and Claire fight an Executioner from Resident Evil:

and eventually reach the Arcadia, which is actually an Umbrella trap to get test subjects and Alice and Redfields battle Wesker, who has both regeneration powers and essentially the speed of the Agents from The Matrix.

The trio thinks they’ve stopped him but Wesker regenerates and escapes and the group frees everyone being kept captive and decide to try and turn the Arcadia into an actual safe haven but Umbrella forces, led by a mind controlled Jill Valentine, arrive to kill them all. 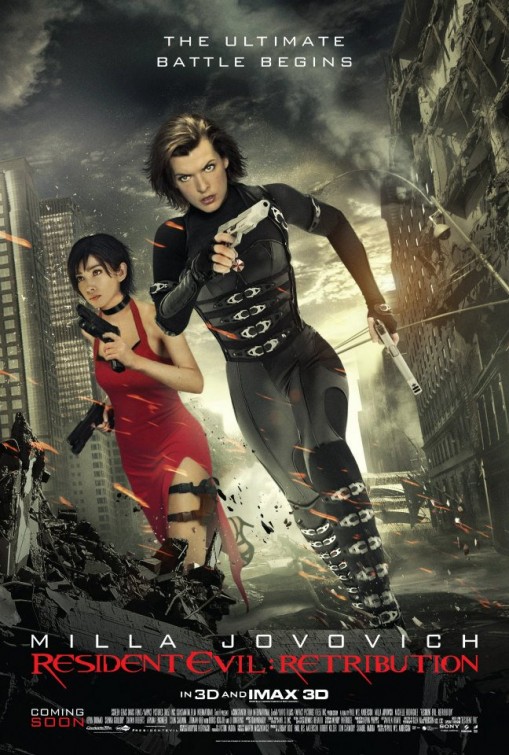 Resident Evil: Retribution (2012): Retribution is less a movie and more insane Resident Evil movie universe fan service, as tons of characters come back including Rain, Carlos and Shade, who are now all mind controlled clones led by Jill.  Following the attack on the Arcadia, Alice wakes up in an Umbrella training facility that replicates cities like Moscow and Tokyo and has clones of regular people being attacked by zombie hordes.

There was an Alice clone in a suburban neighborhood scenario with a daughter named Becky, who the real Alice rescues with help from game characters Ada Wong (Li Bingbing), Leon Kennedy (Johann Urb) and Barry Burton (Kevin Durand) and Luther West (Boris Kodjoe), returning from Resident Evil: Afterlife. The Las Plagas virus from RE 4 and 5 is also a factor here, although it’s more of super solider serum than the horrific cause of mutation it is in the games. The group eventually gets to the Arctic surface above the training facility and battle Jill and Rain, but Luther is killed.  Alice destroys Jill’s mind control device and she rejoins the group, who travel to meet Wesker in Washington DC, who claims to want to help lead humanity in a last stand battle against the undead hordes and sent Ada into the training facility to rescue Alice.  Alice is given back her powers by Wesker and they ready for a battle on the roof of the White House but, judging from the trailers, things don’t go that great.