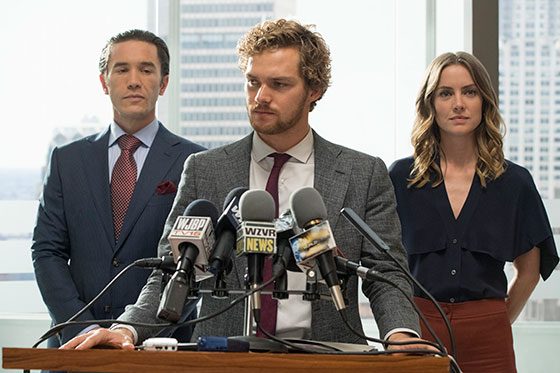 With a little over a month until it debuts, the full trailer for Iron Fist is here, letting us know what we can expect from martial arts master Danny Rand.  After surviving a plane crash that kills his parents, Danny (Finn Jones) finds himself in K’un-Lun, a mystical city in the Himalayas where he trains and is given the power of the Iron Fist, a devastating attack that turns his hands into unstoppable weapons.  Returning home, Danny tries to reclaim his father’s company but Harold Meachum (David Wenham), his father’s old business partner, doesn’t want to give up his power and also seems to be in league with Daredevil villain Madame Gao (Wai Ching Ho).  Danny teams up with fellow martial artist Colleen Wing (Jessica Henwick) and, of course, Claire Temple (Rosario Dawson) to battle evil trying to take over Rand Enterprises and the city.  All of this will also hopefully lead directly into The Defenders this fall.  All episodes start streaming on March 17th and you can check out the trailer below.