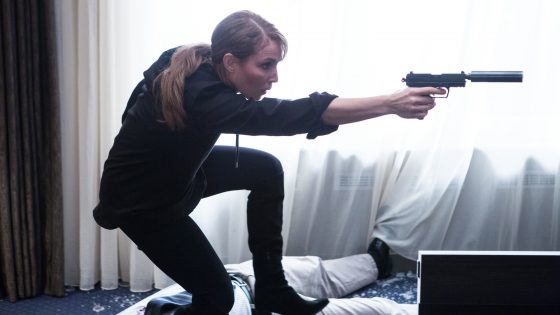 Noomi Rapace get the chance to unleash her inner Jack Bauer in the upcoming action movie Unlocked (which coincidentally takes place in the location of the last Jack season of 24, London).  Rapace plays CIA interrogator Alice Racine, who is called in to get information about an impending biological attack from a captured terrorist but she realizes it’s some sort of fraud or cover up for the actual attack and goes rogue with a war vet named Jack Alcott (Orlando Bloom).  It looks like kind of typical 24/Bourne style stuff with people in giant rooms with screens watching GPS dots and talking about assets and there’s some sort of mole or conspiracy at the top.  John Malkovich, Toni Collette and Michael Douglas round out the main cast and it’s directed by Michael Apted, who directed The World is Not Enough and Chronicles of Narnia: The Dawn Treader.  The movie is out on May 5th in the UK and probably a short while after on VOD and DVD in the US, check out the trailer below.