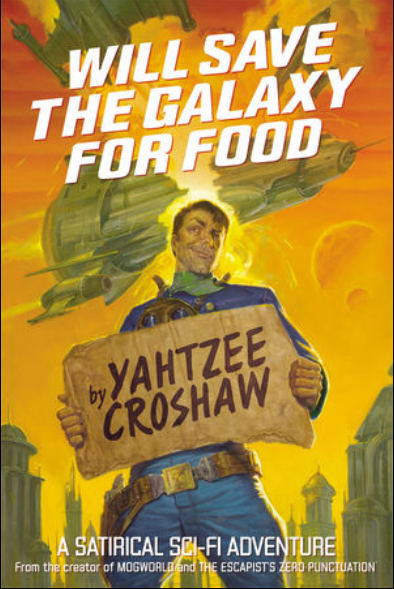 Will Save the Galaxy for Food is sci fi comedy novel that reads like a season 2 episode of Futurama and making all the bad decisions in the Mass Effect games (Which are both good things for the nerdy uninitiated). I’ve been a fan of Yahtzee’s humor from his works on Zero Punctuation and his previous novels, I already predicted to see jokes about European History, Math, American Culture and maybe Vegemite. (Spoiler Alert: I was on the money for some of those guesses).

The story of Will Save the Galaxy for Food is set in the distant future where live forms of all sorts have been connected, epic space wars have been fought and technology industries have risen and collapsed. Quantum Tunneling is the latest transportation service in the galaxy, allowing people to travel to far distances in seconds by channeling quantum worm holes with the need for space travel. However, this service has impacted post-war Star Pilots who were once esteemed for their skills in space battles are now unemployed charter pilots in a rapidly dying market. One unfortunate Star Pilot who was looking to earn some quick money by simply pretending to be someone else leads him in a wild chase from the galaxy police force, pirates, hive mind cyborgs, and a mega cooperation looking to cover up its loose ends.

Readers looking to take a break from the digital world and get back to basics of eyes on text fun should pick up Will Save the Galaxy for Food for a light reading experience are 245 pages. I am not a huge classic sci fi nerd, but I enjoyed the satirical approach to the story and characters, Fans of a slew of sci fi subjects will easily get on board with WSTGFF as it is a funny parody to many sci fi tropes; A antihero rogue as the main lead, scientific and ugly spaceships, military forces stuck with bureaucratic regulations, civilized pirates that demand government oversight and multiple damsel that don’t need saving. I’ve had a sense of the grand scale of the universe of the story, but the main focus of the Star Pilot lying his way through out the galaxy was easy to understand. It was enjoyable to pick up where I last read without checking an appendix to figure out fake science sounding words.

Will Save the Galaxy for is will be released February 14th. You can find more info at the Dark Horse website for details.