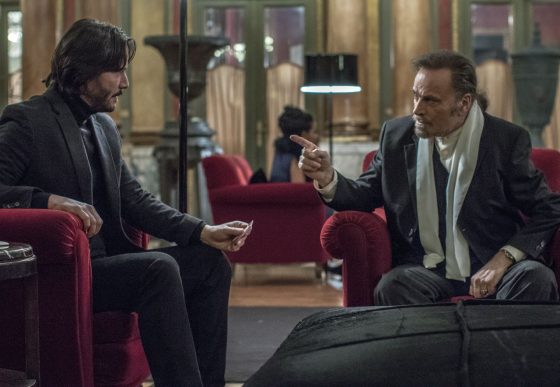 When it hit in 2014, John Wick was a revelation with it’s steely lead performance by Keanu Reeves and it’s incredible “gun-jitsu” action sequences that made it an instant action classic and one of the action movies of the last decade.  Now the sequel is here and it does everything all great sequels should: expand the world, up the action and find new, interesting predicaments for our hero.

Picking up a very short time after the first movie, Chapter 2 starts with John, after having successfully avenged his puppy, looking to recover the other thing that was taken from him, his beloved Mustang.  He gets it back in slightly worse shape after a brutal car chase/fight with the goons running the chop shop it’s at run by Abram Tarasov (Peter Stormare), the brother of John Wick villain Viggo Tarasov.  The pair come to a truce and John returns to retirement after having Aurelio (John Leguizamo) come pick up the destroyed Mustang to repair but, later that night, Santino D’Antonio (Ricardo Scamarcio) arrives and demands John honor a blood oath he gave in exchange for Santino helping him with the “impossible task” that got him out of the assassin game.  After initially refusing, Santino blows up his house and, after conferring with Winston (Ian McShane), John realizes he has no choice and must assassinate Santino’s sister, Giana (Claudia Gerini) to give Santino her seat at the powerful “high table” that runs this huge global underground.  While the first movie was straight forward revenge plot, Chapter 2 is guided by the strict code of conduct and rules of the wonderful criminal underground world that was established in John Wick and, personally, I cannot get enough of it.  When John heads to Rome to complete his contract, we find out there is another Continental run by none other than Franco “Django” Nero and we get to see more of the services provided by that hotel chain, including a “sommelier” (played by Peter Serafinowicz) who is actually a recommender and provider of weapons and suit store that makes tactical formal wear.  We also find out how hits are actually made in this universe where you call a 1940’s style phone switchboard staffed by what seem like either roller derby or Suicide Girls.  All the specifics about the conduct of hitman, the way everything works and what the hierarchy of this universe is is endlessly fascinating to me and just as much of a draw as the action and it’s what sets the John Wick series above most other action movie franchises.

Speaking of the action, it’s just as great as first movie with some absolutely inspired set pieces, including a battle in an art exhibit full of mirrors that is one of the most visually insane shootouts I’ve ever seen and a brutal battle in the catacombs of Rome.  The best sequences though are probably John’s duels with Cassian, played by Common, which includes an almost They Live style fist fight down a giant set of stairs in Rome and a sequence in NYC’s subway system where they are casually taking pot shots at each other while walking toward the train.  Common is a great foil for Keanu and gives John Wick someone who can actually stand up to his preternatural skills.  Less impressive is Ruby Rose, which is surprising after she was so much fun in Return of Xander Cage.  Her character Ares is a mysterious, deaf assassin but it’s all build up to a fight with John that is over almost as soon as it begins, so it’s strange why they dedicate all that time to her when we could have gotten more with Common or the Continental side of things.

If you were a fan of John Wick, Chapter 2 delivers everything you loved and more.  The body count is higher, the locales more exotic and the world of the Continental is expanded in a wonderful and fascinating way.  Keanu and director Chad Stahelski have said they want to make a trilogy and Chapter 3 cannot arrive soon enough.