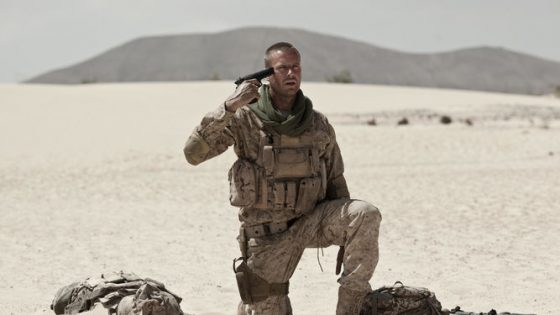 Last year we got a ton of great horror thrillers where people were trapped in crazy situations with Green Room, 10 Cloverfield Lane and Don’t Breathe.  This year seems like a we’re getting a similar trend but this time more action/war based scenarios.  John Cena and Aaron Taylor-Johnson are going to be trapped by a sniper in The Wall and Armie Hammer takes a wrong step and ends up stuck on a landmine in Mine.  Hammer plays a Marine who is sent with his spotter for a sniper mission to take out a high value target but the mission goes bad and they inadvertently stumble into a minefield making their exfiltration.  His spotter is instantly killed but Hammer remains on his mine, but can’t move or it will go off.  Managing to contact his base, he finds out his only chance is to hold out for 52 hours until a convoy is near enough to rescue him.  It looks Hammer is going to go through hell with some 127 Hours style flashbacks sprinkled throughout.  It’s out on April 7th and you can check out the trailer below.

Blake Lively Takes On a Shark in The Shallows (Trailer)