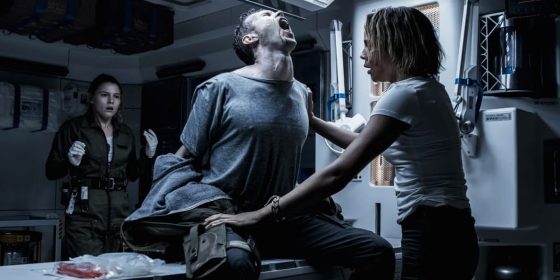 After the great character building prologue video last week, a brand new full trailer for Alien: Covenant is here and it looks like if you are looking for old school Alien/Aliens style horror/action, this is it.  Set between Prometheus and Alien, Covenant follows the crew of that titular ship, who are on the first major off-world colonization mission in human history.  Arriving on a seemingly idyllic planet, they instead find the Engineer ship commandeered by Dr. Shaw and David (Michael Fassbender) at the end of Prometheus that is full of new and old flavors of Xenomorphs.  The cast for Covenant is insane and includes Katherine Waterson, Danny McBride, Billy Crudup, James Franco, Fassbender and Demian Bichir and Ridley Scott is baack to direct.  Prometheus was interesting on a world building level but not so much on a plot level but this looks like exactly what Alien fans have been waiting for.  It’s out on May 19th and you can check out the trailer below.