The hits didn’t stop on Saturday as we got to check out more awesome games at PAX East 2017. Saturdays always bring in the packed crowds, and the bitter winter cold kept the gamers inside. We wiggled around the crowds to get some play time with some arcade style “sports” games, a new take on a classic movie and much more. Read on to find out about everything we saw on Day 2.

We kicked things off on Saturday by visiting the Playdius booth, who are becoming a major up and coming indie publisher and the first game we checked out was Neurovoider.  An old school twin stick shooter, you play as a brain riding in a robotic shell taking on evil robots that have gone haywire and are threatening the world.  You collect both scrap and loot drops and can upgrade your robotic shell after every level with new weapons, armor and movement styles.  It’s fast paced and there’s a great variety of weapons and armor types you can equip on your bot and the soundtrack is fantastic as well.  It will be out sometime this Spring for PC and console. 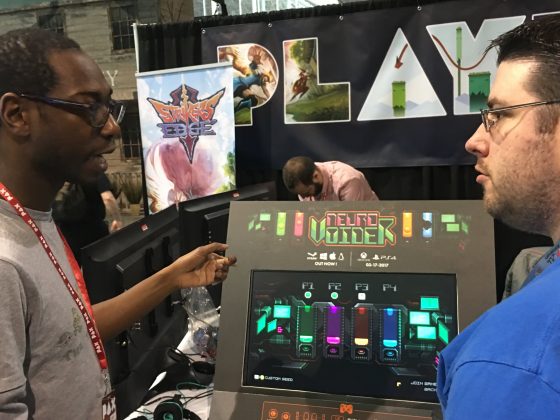 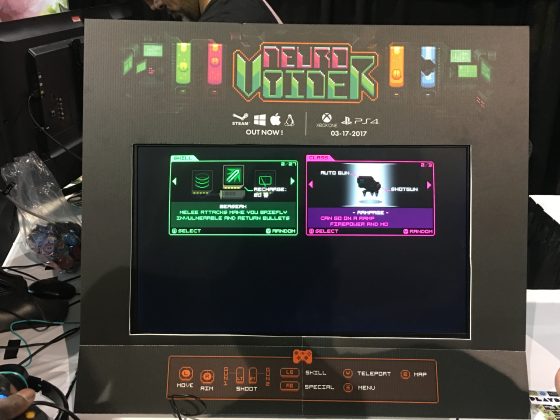 The next game we checked out at Playdius was Striker’s Edge.  At it’s base level, it’s dodgeball, but you are playing as a variety of historical warriors and the goal is to hit your opponent with your weapons enough times to bring down their life bar and kill them.  It’s super fast paced with normal and special charged shots and each character plays differently, so there’s lots of room to expirment and find which one works best for you. It also feels like an arcade classic like Windjammers and there’s a single player campaign as well as 1v1 and 2v2 modes and it should be out later this year on PS4 and PC. 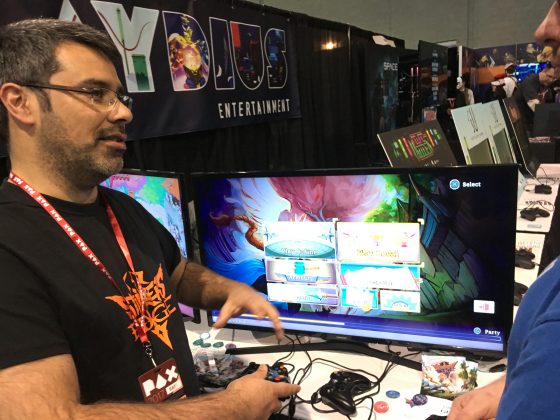 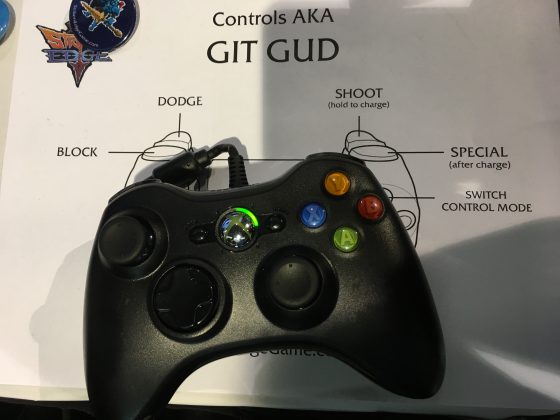 The last game we checked out at the Playdius booth was Pankapu, which is a 2d action platformer with absolutely gorgeous art that tells the story of a boy who is being threatened by nightmares and you play a dream warrior (cue Dokken) that battles through the dream realm to stop them.  You character can switch forms, each with a unique weapon and skills and it’s all around solid platforming like you would have found on the SNES or Genesis back in the day, except now with the aformentioned incredible art style.  The game is also episodic and episodes 1 & 2 are out now on Steam and should be out on PS4, Xbox One and Switch soon as well. 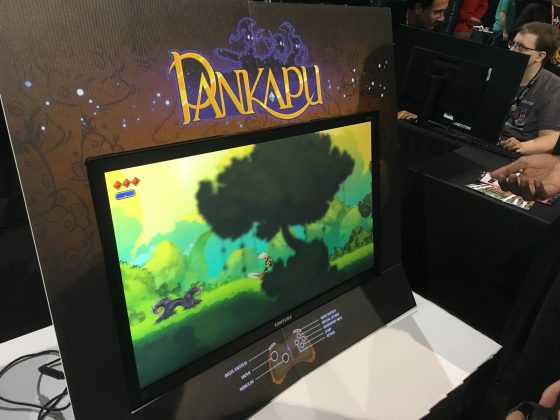 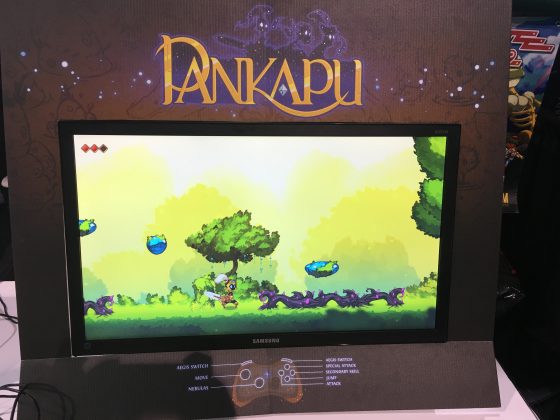 Coming from Earthworks Games out of Australia, Forts is a realtime 2D base building/siege game that will most likely draw comparisions to Worms but the real time aspect really sets it apart.  Chris and I got to play head to head with some prebuilt mega forts but in the actual game, you’ll first build up your fort using similar mechanics to what you might find in something like Bridge Constructor and then you’ll place weapons and take on your opponent across the map.  There is a wide range of weapons available including giant lasers, cannons and silo launched missiles and the destruction they cause is insanely satisfying as you see the entire structure rock and supports collapse.  It will be out on Steam on April 19th. 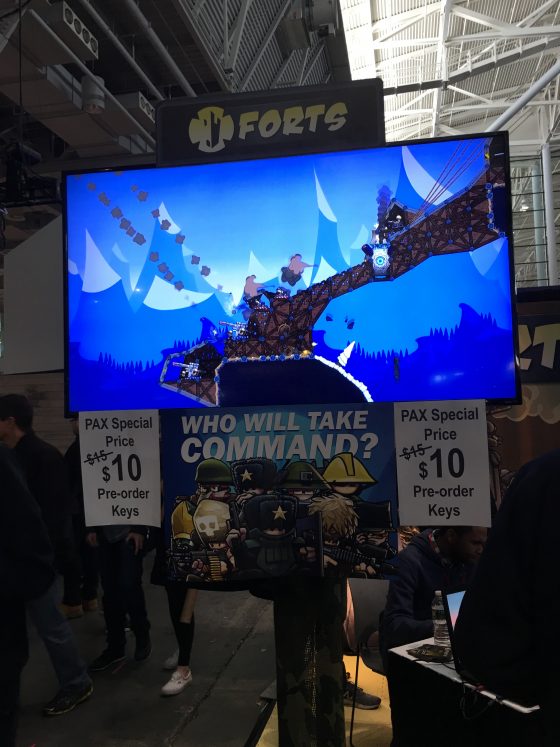 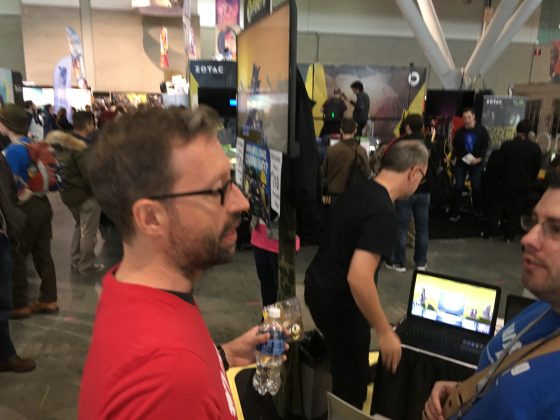 Conarium is first person horror game that takes it’s inspiration from HP Lovecraft, specifically “In the Mountains of Madness” as your character explores bizarre arctic ruins that seem to have mysterious and dangerous secrets.  The game looks fantastic thanks to the Unreal 4 engine and the “Madness” part comes in when your character sees glimpses of the past to a prior expedition at the site.  You will have to track down items and use them to solve environmental puzzles, like in our demo we had to find an artifact that was able to clear away deadly vines from a tunnel opening and use an ax to chip away at ice to move some ancient machinery.  It’s coming later this year to Steam. 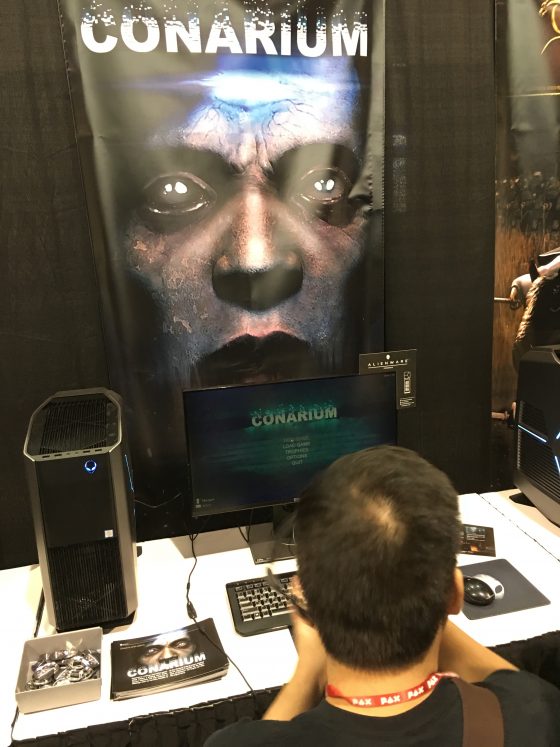 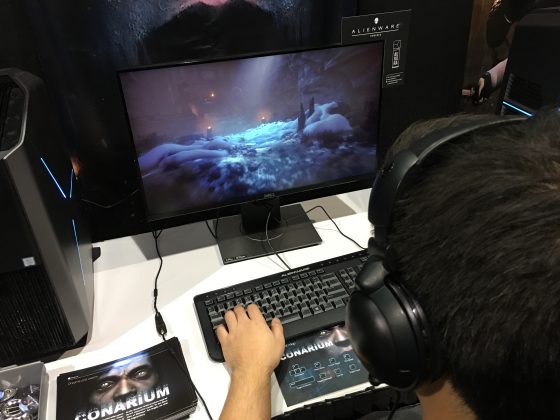 Announced shortly before PAX started, Big Star Games is working with Lionsgate for Reservoir Dogs: Bloody Days, a new take on the Tarantino classic.  Featuring something the team is calling “single player co-op”, Bloody Days puts you in control of a team of three of the Dogs, one Leader, one Required and one player choice character and the missions are all various heists based on the film or expanding on things mentioned in the film.  The Leader character moves first and sets a time checkmark and then you can rewind time and move the second character while the Leader does what you just did prior again and the same for the third character, which leads to a ton of strategy about who is going where and doing what and you can do things like kill an enemy that killed another of the Dogs and rescue that character so they can continue in the heist.  It’s super creative and much more exciting and interesting than just a generic 3rd person shooter based on the movie.  It’s out later this year on Steam. 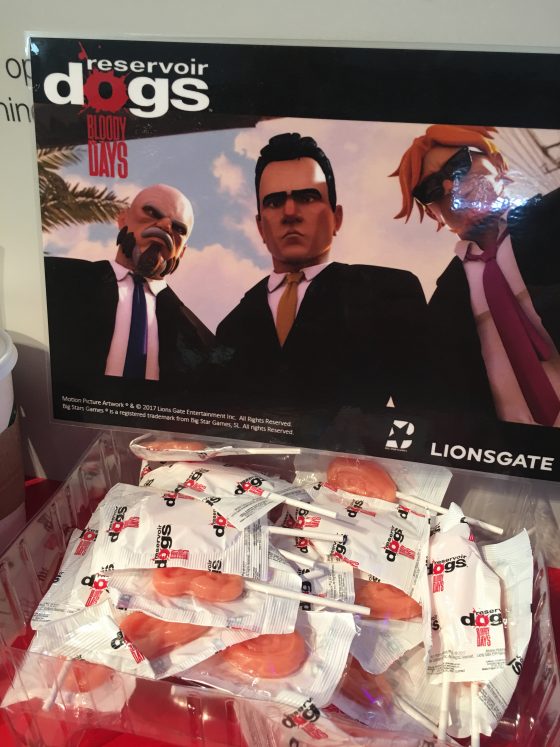 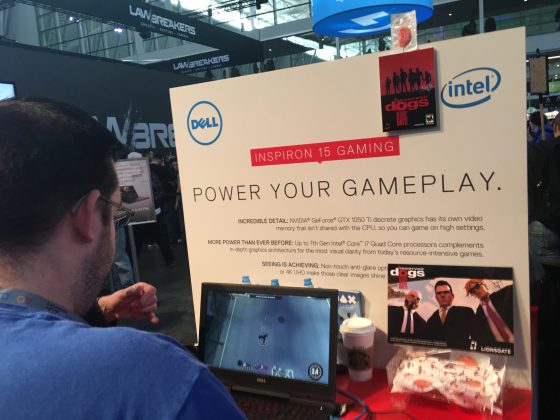 We spent some time in the Gambitious booth on Saturday afternoon and the first game we checked out there was top down action game Redeemer.  Playing as Visily, a former mercenary turned monk, you have to return to your violent past when the corporation you used to work for attacks the monastery.  The game is brutally awesome, with visceral melee and ranged attacks and it zooms in for some great looking finishers and environmental kills.  There’s a great sense of destruction as well as you kick open doors and punch guys through walls and it just feels like you’re playing a great, bad ass action movie, which is exactly what we are looking for.  It’s coming out in the Spring for Steam. 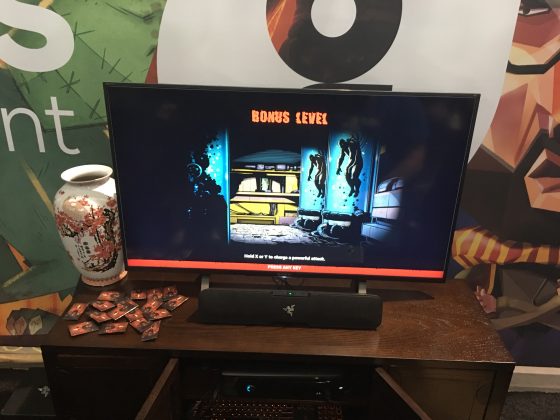 Oh Sir! The Hollywood Roast: A follow up to the original Oh Sir, The Hollywood Roast has you competing against the computer or a human opponent to try and craft the best insults possible.  You share a list of words and phrases with your opponent and take turns picking them to fill out your insulting sentence.  In this version, the characters are all parodies of movie characters like Harry Potter and Gandalf and there’s lots of specific weird references based on the characters.  It’s fun, unique game that seems like it would be perfect as a party game with friends. 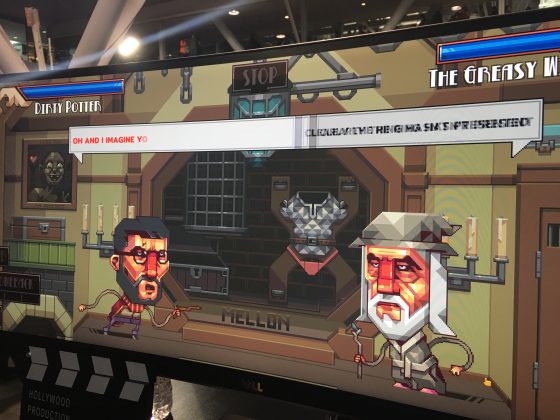 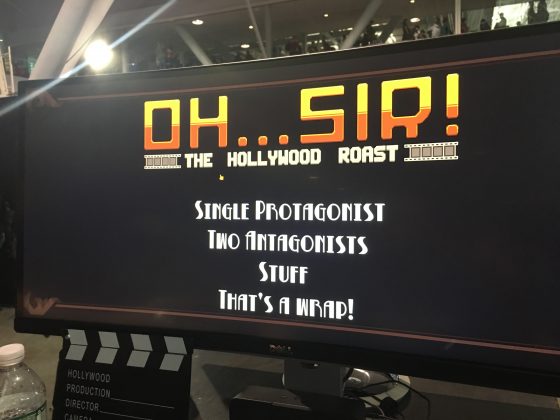 What’s more horrifying than 1 monster? 2 monsters. Or 10 of them living in a mansion together. Machiavillan is a sim game that has the player build and manage a death trap mansion. As an Evil Villain, its up the the player to gather resources to create the rooms of the mansion, summon cutesy but deadly horror creatures and lure in victims in to the mansion. The game was inspired by similar games like Prison Architect, and there are obvious references to the classic Universal Monsters (Plus a handful of neat modern monsters). As you build a simple house into a mansion, the missing victims that you have killed increase the level of interest by the towns folks and will attract Monster Hunters to battle the mansion’s creatures. The demo we tried had us start from absolute scratch, with only a few starter helpers to gather resources and slowly maul low level victims to build up the mansion’s infamy, we started with basically a cabin in the woods type house, killing curious bystanders and building up a small army of simple zombies. There was a learning curve to get the flow of the controls and understand each monster’s mechanics, but the game felt really balanced and was addictive to try and build my humble horror cabin into a multiple room death lodge. Developer Alexandre Lautié showed us a later build, where the Mansion is fortified with various monsters, traps, fully decorated rooms and a crowd of torch & pitch fork wielding towns people had tried to burn the place down. The game is planned to be released for PC, and is currently in a beta build. 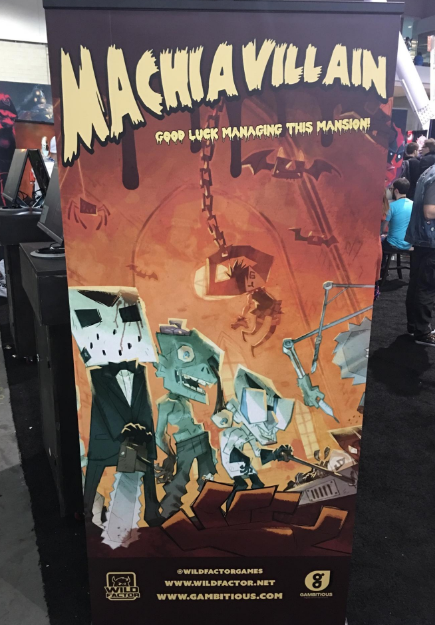 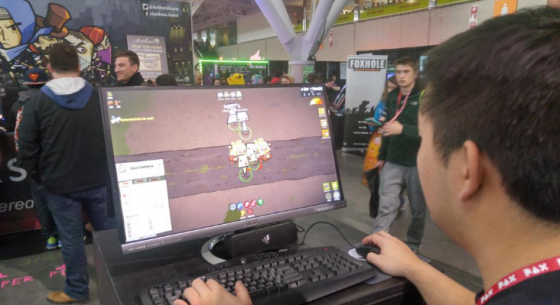 Coming from the team who brought you the bizarre adventure that was Soda Drinker Pro, Bobby Throne Saves the World is the first televangelist simulator where you step into the shoes of Bobby Throne, the self proclaimed “Prophet of the Coins” and try to build up your worship empire from a strip mall church to a televised megachurch and you can step into VR and puppet Bobby to perform faith healing and expound on the virtues of the Coins or you can also become a spectator in someone else’s game and attend a sermon.  We didn’t experience the game hands on but we did get a QA with Bobby himself and try to learn the power behind the coins.  It should be out sometime this year. 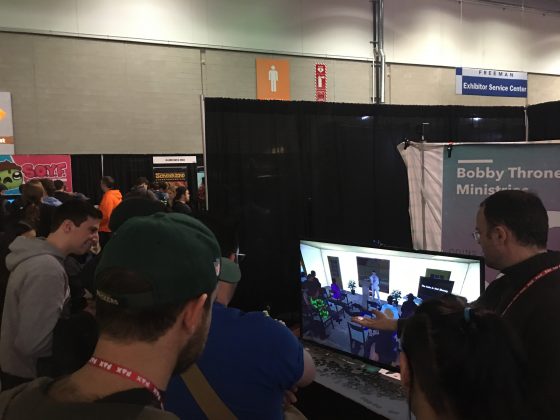 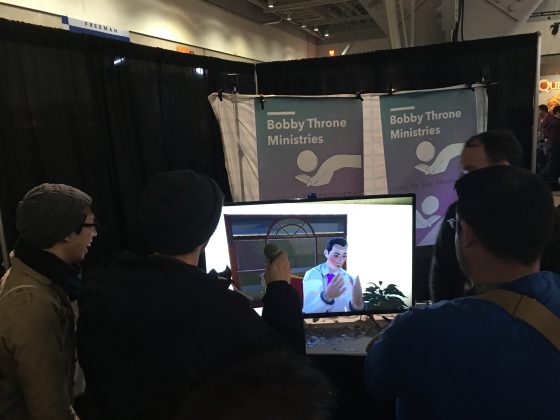 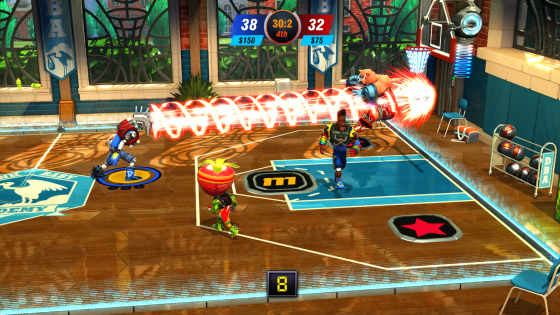 Coming from Andy Hull, programmer on Spelunky, Dunk Lords is an arcade style basketball game with tons of additional features layered on top.  After picking a team from a cast of colorful characters, the game plays sort of like NBA Jam with tons of over the top dunks and stealing the ball from the other team but in between quarters, your team can share money earned and buy upgrades like a magnet that sucks the ball directly to you after any bounce off the net or armor to make it harder to steal the ball.  There are also spots on the floor that can give power ups or additional money a la Mario Kart and you can use fighting game style moves like uppercuts to steal and block the ball as well.  The game will feature a single player campaign in addition to the multiplayer action and it should be out sometime next year on Steam. 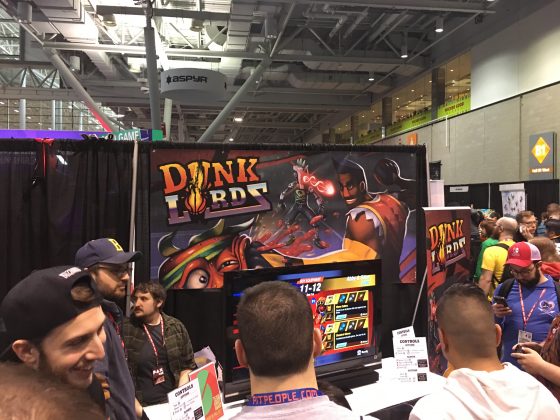 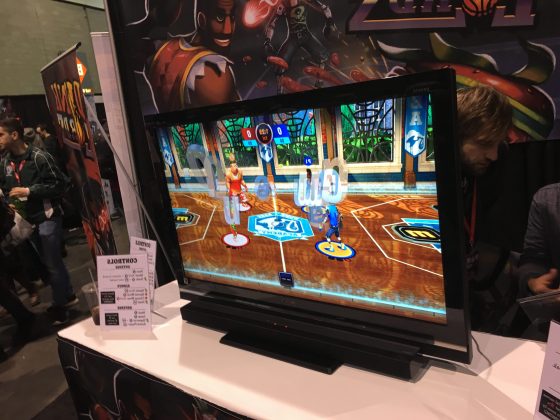 Flipping Death is a new adventure platformer game about a teenage girl named Penny, who has mysteriously crossed into the world of the dead. She is forced into taking a job as a Grim Reaper and is given the power to posses the citizens of Flatwood Peaks, flipping between the two worlds to solve puzzles, complete side quests and uncover the nature of her death. The gameplay is similar to Zoink Games’ Stick It To the Man, but with the powers of Death and teen angst. We found the art style to be very interesting and the wacky character interactions to be funny, and it’s also supposed to take place in the same world as Stick It To the Man. The game requires a lot of exploration and it’s vital to flip between worlds to discover clues to solve some puzzles. Flipping Death is scheduled to be released sometime in 2017, and is coming to PS4, PC and the Nintendo Switch. 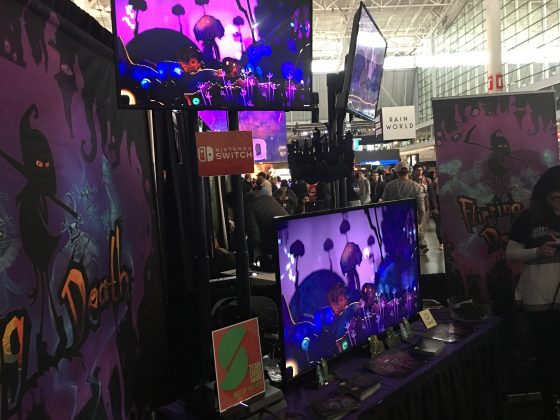 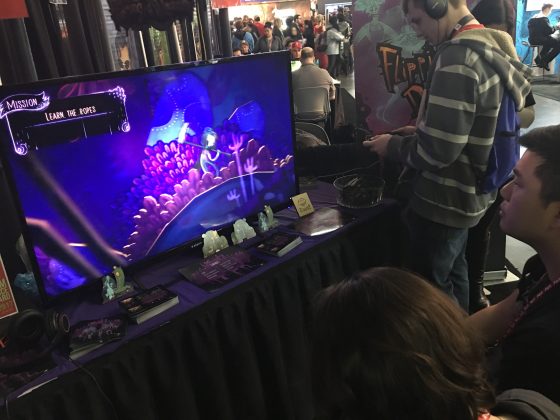