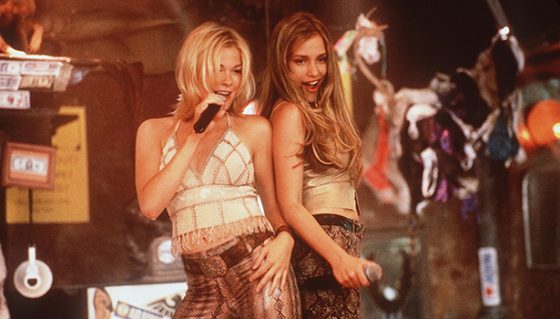 Can’t Fight the Moonlight from 2000’s Coyote Ugly is unique in the world of soundtrack songs in that, not only is it a major plot point, the version sung by LeAnn Rimes also exists and she shows up at the end of the movie to perform it.  In the movie universe, Piper Perabo’s Violet heads to NYC from New Jersey with dreams of being a songwriter but after some mishaps, she discovers the Coyote Ugly saloon and starts working there after meeting some of the other bartenders and seeing the tips they earn.  She also eventually overcomes her stage fright and lands a record deal but somehow LeAnn Rimes also gets a hold of Violet’s song and performs at the Coyote Ugly with Violet for a CD release party.  Rimes recorded four songs for the Coyote Ugly soundtrack, all which were written by Violet in the movie universe, and Can’t Fight the Moonlight topped out at #11 on the Billboard Hot 100 and the album has a whole hit #9 on the Billboard Hot 200 Albums and #1 on the Billboard Country Albums charts.  Check out the music video below, which strangely only features Coyote Izabella Miko and not Perabo or the other Coyotes like Maria Bello or Tyra Banks except in clips from the movie.