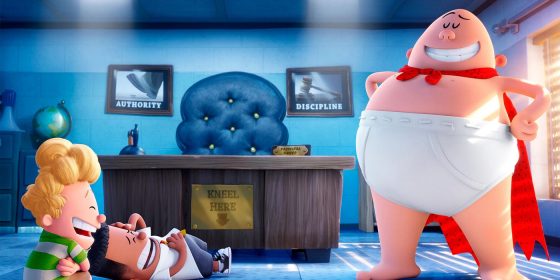 Around for over 20 years, Captain Underpants makes his big screen debut this summer in the latest from Dreamworks Animation.  Starring Thomas Middleditch and Kevin Hart as best friends Harold and George, who hypnotize their crusty principal Mr. Krupp (Ed Helms) into becoming the whitey tighty wearing superhero Captain Underpants.  When it seems like an actual supervillain arrives at the school in the form of Professor Poopypants (Nick Kroll), Harold and George have to guide the Captain into saving the day.  Kristen Schaal and Jordan Peele co-star and the movie written by Muppets director Nicholas Stoller and directed by Turbo director David Soren.  It’s out on June 2nd an you can check out the first trailer below.

Netflix Gets Weird in June with Okja (Trailer)