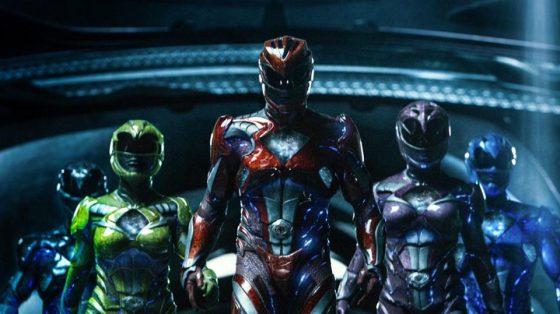 One of the things as a kid that burned geek culture into my DNA was the original Mighty Morphin’ Power Rangers, so I was fairly wary of the “gritty” reboot that Saban was developing with Lionsgate.  Now that’s it out, it turned out much better than I originally feared but it’s definitely not the Rangers reboot most of us wanted.

Still set in Angel Grove, although now it’s a Maine or Pacific Northwest fishing/mining town, 5 troubled teens: Jason (Dacre Montgomery), Kimberly (Naomi Scott), Billy (RJ Cyler), Trini (Becky G) and Zack (Ludi Lin), are together when Billy, trying to follow through on something he and his father were exploring, explodes a rock wall at the local gold mine and unearths 5 mysterious stones.  The quintet, after surviving a car crash involving a train, wake up the next day fine and with incredible strength and agility.  They explore further into the mine and discover a hidden alien spaceship which is inhabited by Alpha 5 (Bill Hader) and the mental essence of Zordon (Bryan Cranston), the original leader of the Power Rangers.  Zordon tells the group they have to become the Power Rangers to stop Rita Repulsa (Elizabeth Banks) from destroying the Earth.  The actual Power Rangers plot seems like it’s almost intentionally glossed over, with Zordon and Alpha 5 assuming the teens already know everything like the audience does but there are some pretty significant changes to the mythology that would probably could have used some more explanation, especially since it would have been Bryan Cranston giving some gravitas to the insanity.  It almost feels like the movie is actively fighting itself as well, it knows it has to have the ridiculous morphing and zord battling but it resists until the last possible moment and, at that point, it’s jarring and out of place, like when the theme song finally plays for all of 30 seconds.  Oh, it also has to be mentioned that the product placement for Krispy Kreme is out of control with the actual plot of the film hinging on the Angel Grove Krispy Kreme, I kid you not.

The movie’s actual focus on the building of the team actually does work fairly well and although they aren’t the most fleshed out characters in movie history, you get enough to care and they are more than just their afterschool activity of choice like the original show.  They are a pretty dysfunctional team at first and it reminded me a bit of what Netflix did with the Voltron reboot where Team Voltron couldn’t even figure out how to transform until the third episode or so.  RJ Cyler is the standout, making Billy the heart of the team while also portraying him as having high functioning autism in what seems like a fairly respectful way.  All the Rangers have some sort of personal baggage, some working better than others (Kimberly’s is particularly bizarre) but their Ranger training is fun, especially with the more sarcastic Bill Hader Alpha, and there’s some decently dramatic emotional scenes as well, including one where they share their deepest secrets around a campfire.  Elizabeth Banks as Rita though is in a completely different movie than the grounded teen drama of the Rangers, one that completely embraces the campy fun of the original show.  She’s devouring scenery as she stalks around Angel Grove looking for gold to rebuild Goldar (who is just a mindless giant gold monster here unfortunately) and she’s doing things like ripping out people’s gold teeth and swallowing gold necklaces at a jewelry store.  The final battle when things finally go full Mighty Morphin is solid but it’s nothing you haven’t seen done better in things like Pacific Rim and the new Megazord is not particularly cool either, definitely not as cool as the OG Megazord or some of the ones that followed.  I did appreciate the fact that the Zords separately get to do more than in the original show and they look better than I expected and still recognizable as their prehistoric counterparts.

Overall, Power Rangers is a pretty mixed bag.  The new team is solid and their training and coming together as friends and teammates is fun but the Power Rangers side of things is not particularly great (although not outright bad either) and the movie almost seems to actively be fighting against and dismissing that side of itself.  It might just be this particular director, Dean Israelite, who was equally as dismissive of the time travel rules and mechanics in Project Almanac in favor of things like a 20 minute commercial for Lollapalooza.  If they get a director who can embrace the fun of the original with the story they seem to be setting up in the mid-credits scene, we might get the Power Rangers movie we’ve been waiting for.