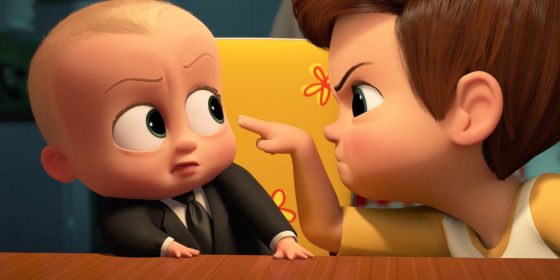 The Boss Baby held off all competitors this weekend, including the direct competition of Smurfs: The Lost Village, for another #1 weekend at the box office.

The Boss Baby took in another $26.3 million, putting it over $89.3 million for it’s two weeks out.  It’s currently 27th overall in the Dreamworks pantheon.

Beauty and the Beast remained in second with another $25 million and it’s made over $977 million worldwide and it’s pretty much inevitable that it will make over $1 billion.

The Smurfs: The Lost Village opened in third place with $14 million, lower than either of the prior Smurfs movies from Sony and one of the lowest openings for Sony Animation, only beating Arthur Christmas and The Pirates.

Going in Style took fourth with $12.5 million, which is above the studio’s expectations of $8 million.  Compared to similar movies like Last Vegas or Tower Heist, it’s on the low end.

Ghost in the Shell rounded out the top 5 with $7.4 million, putting it over $31 million for it’s two weeks out.  It dropped 60% from last week but this past weekend it opened in China and made $21.4 million there and it’s international gross is $92.8 million.

The only other wide release, The Case for Christ, barely eked out 10th place with $3.9 million, putting it at 26th place as far as the recent Christian movies between Woodlawn and Do You Believe?.

All this is pretty much moot though because The Fate of the Furious arrives this weekend to destroy everything at the box office.

Battle at the Box Office 6/5