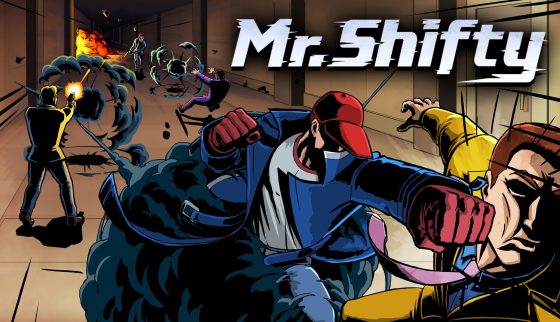 Another edition of Gamebox 2.0 is here and we’ve gotten the chance to check out a bunch of games on PC and console this time around, including the latest episode of Telltale’s The Walking Dead and some recent PS Plus selections.

Mr. Shifty: Out today (4/13) on Steam and the Switch, Mr. Shifty plays similarly to something like Hotline Miami, except for the key difference is that you are essentially Nightcrawler, as Shifty has teleportation powers that lets you zip around rooms and through walls to take down enemies.  The story of the game has Shifty infiltrating a high tech tower to retrieve the power Mega Plutonium from the evil Chairman, who wants to turn it into a weapon.  Shifty has backup from his hacker partner Nyx and your goal is to defeat the enemies in each area and clear the stage objective, whether it’s to get to a specific elevator or find a computer terminal or item.  There are a bunch of environmental weapons you can pick up and use as well.  It’s not quite as brutally difficult as the Hotline games but there’s still a ton of challenge and it’s a ton of fun to appear behind an enemy and punch him through a wall or window.

The Walking Dead: A New Frontier Ep. 3: Despite it’s title of “Above the Law”, there’s unfortunately no Steven Seagal here.  Instead, you’ll enter the city of Richmond, controlled by the Saviorsesque New Frontier and reunite with David, the brother of the character you control, Javier.  The main throughline of this third episode is deciding whether you can trust and back up David, who we’ve seen in flashbacks was kind of an asshole and did something potentially unforgivable to Clementine when she was in the New Frontier.  You also have to potentially play politics with the three other people who run Richmond with David and there’s a great dialogue sequence where you have to decide to play it cool or drop some harsh truths.  For fans of the show and comics, Jesus is one of your allies for most of this episode as well and he name drops The Kingdom at one point.  It’s another solid episode in what’s been a pretty great season so far, even if you are only controlling Clem for brief flashback sequences, and things seem to be ramping up for the next episode.

Aaero: If you’ve enjoyed recent games like Thumper and the re-release of Rez in VR, Aaero should be right up your alley.  You pilot a ship and have to navigate levels based around the electronic and dubstep songs that make up the soundtrack (all of the songs I’ve played through so far have been fantastic BTW) and the main rhythm gaming mechanic is that you have to line up and grind your ship along a rail that is tied into the vocals or beat of the song.  Enemies also pop up and you have to paint them a la Rez to launch missiles to destroy them and there’s environmental obstacles tied to the beat as well.  There are three different tiers of challenge with different songs in each and you have to earn enough stars on each level to progress and you can play an unlocked song in the “chill out” mode as well.  If you’re into rhythm action games, this is definitely one to check out on PC, PS4 and Xbox One.

Drawn to Death: One of this month’s PS Plus games, Drawn to Death is the latest game from David Jaffe, the man behind Twisted Metal and God of War.  Drawn to Death is set in the world of a high school boy’s notebook drawings and it’s a multiplayer shooter where you take on three other players in various game modes, like regular deathmatch or modes like Organ Donor, where you have to collect hearts from dead enemies and deposit them in a goal.  The characters are all unique and you can see the Twisted Metal roots in characters like Alan, who is a chainsaw wielding serial killer with a teddy bear mask, and each character has unique special moves to master.  There’s a ton of unique weapons to unlock as well, like a NES to shoots an explosion of 8 bit JRPG characters.  It seems pretty solid as far as gameplay but it seems like it’s trying a little to hard to be edgy and cool, it’s like the kid whose notebook this is, his favorite movie is Crank or something.  If you have PS Plus and like MP shooters, you don’t have anything to lose to check this out but it will probably turn off a lot of people with it’s attitude and style.

Disc Jam: One of last month’s PS Plus games, Disc Jam is potentially trying to be the new Rocket League and is also a throwback to arcade sports games like Windjammers.  Disc Jam is a competitive frisbee game where you are trying to get the disc past your opponent and into their end zone to score points, first to 50 wins the round.  There are basic throws and lobs but the real key is to perfect how to do special throws and get the timing of when to grab the disc in flight to give it a boost.  It’s fast paced and the matches go pretty quick and it’s pretty awesome when you get in a good volley with an opponent.  I’ve had a little trouble finding opponents but I’m not sure if it was the time of day or the location and I haven’t have been able to get a doubles match yet.  If it wasn’t free on Plus, I probably wouldn’t have gotten it right away but since I have it, it’s a fun diversion for a match or two if I don’t feel like diving into a full on session of something like Horizon Zero Dawn.

Transformers: Forged to Fight: Kabam, the company behind Marvel’s Contest of Champions, brings the Transformers to your mobile device of choice in a new fighting game called Forged to Fight.  Bringing in all generations, including Beast Wars(!), you join Optimus Prime and the Autobots as they crash land on mysterious planet and find versions of their friends and foes corrupted by Dark Energon and they have to fight their way through and find out what is going on.  The game is free to play but there’s a bunch of things the game wants you to buy like crystals that have characters in them or in game currency and energy but it doesn’t seem to be too annoying about it so far.  The gameplay is an evolution on the simple but fun Contest of Champions gameplay and it introduces a long range blaster attack to the up close punches and special moves and you can also dodge side to side as well as back and forth.  The game seems like it’s a bit Bayformers heavy but you can still get classic G1 bots like Sideswipe or Ratchet as well and they start you off the proper way with G1 Optimus as your first bot.  If you are a Transformers fan, it’s definitely worth checking out.

Snake Pass: We played a bit of this platformer at PAX East but now the full game is out and despite it’s cutesy characters, will turn your brain and fingers to mush as you try to figure out it’s unique control scheme.  The team at Sumo Digital really tried to make Noodle the Snake control like an actual snake would, so you have to master slithering back and forth to move and wrap yourself around bamboo to climb.  Things start out fairly tame but you quickly have to learn to grip and navigate your way around multiple bamboo towers and bridges as you collect the three gems you need to unlock the next level.  It’s unlike most anything you’ve ever played and if you want old school Rare style characters with a modern and unique control scheme, it’s definitely worth checking out on PS4, PC, Xbox One or the Switch.

Liquid Sky 2.0: Last but not least this week, we got to check out Liquid Sky 2.0, which is not actually a game, but a cloud gaming service that’s looking to allow you to play the best PC games no matter what device you are on.  After downloading the client, you hook into your personal “Sky Computer”, which are powerful remote gaming machines, and you can then log into Steam or your Windows/Microsoft account and download and play games on that PC at high and ultra quality, even if the laptop or PC you are actually on is crappy.  It seems to work well, I was able to play things like Ryse: Son of Rome on my old laptop that couldn’t in it’s wildest dream play it normally. There seems to be a little bit of fiddling you may need to do with a controller, as it has to pass-through your local machine to the cloud machine and may need to be calibrated and you are charged by the hour in “SkyCredits” but there is a free plan that trades viewing ads for credits along with a “Pay as You Go” $4.99 plan and a monthly $9.99 plan that gives different levels of storage and credits.  A top of the line gaming PC with 8 GB of RAM and 12 vCPU cores costs 240 credits/hour, for example.  There will be Android and Mac versions coming soon and I would be very interested to see how it works on an Android phone or tablet.  You can head over their site and download the client and sign up for the beta, which is rolling in new users in waves now.