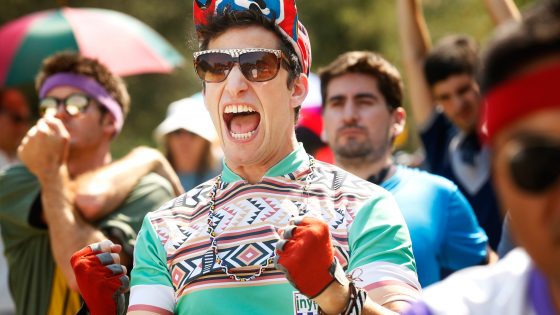 Andy Samberg is bringing another sports mockumentary to HBO in July with the bicycling spoof, Tour De Pharmacy.  Following up the hilarious 7 Days in Hell, Samberg stars as one of the competitors at the 1982 Tour De France, a competition where everyone was doped up on steroids and other drugs.  Just like 7 Days in Hell, there’s an all star cast of talking heads and reenactors including Maya Rudolph, Dolph Lundgren, Joe Buck, Daveed Diggs, Will Forte, Orlando Bloom, Mike Tyson, Julia Ormond, Phylicia Rashad and somehow even Lance Armstrong.  Jake Szymanski, who directed 7 Days in Hell, is back to direct and it’s airing on HBO on July 8th, check out the trailer below.

Peter Tries to Figure Out His Fancy New Suit in the Final Spider-Man: Homecoming Trailer

Valerian and the City of a Thousand Planets Trailer