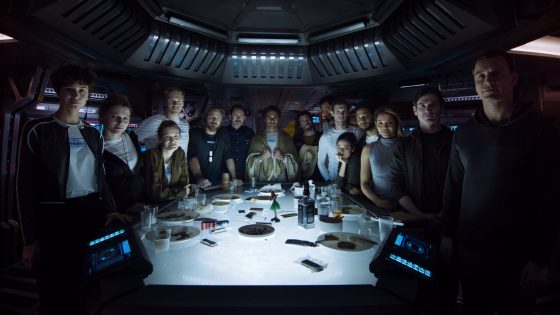 Alien: Covenant managed to keep Guardians Vol. 2 from threepeating at the box office with $36.2 million for an opening.  It’s the third best opening for the Alien series but it’s way below Prometheus, which opened at $51 million in 2012, and it was also below Alien vs Predator, which opened at $38 million.  Covenant cost $33 million less than Prometheus to make, so it has slightly less to make up to break even/profit.  Internationally, it’s made $81 million so far, bringing it’s grand total to just over $117 million.

Guardians Vol. 2 dropped to second with $34.6 million and it’s crossed over $300 million domestically and has over $732 million total worldwide right now.

Everything, Everything took third place with $12 million, above expectations going into the weekend, and it was right around other teen dramas like Paper Towns and If I Stay.

Snatched and King Arthur rounded out the top 5, both dropping over 50% from last week’s opening, with Snatched close to an almost 60% drop off but it still managed to top King Arthur.

Diary of a Wimpy Kid: The Long Haul took sixth with $7.1 million, easily the worst opening for the franchise and around half as much as the opening of the third movie in 2012.

Further down the charts, Beauty and the Beast is now one of the ten all time highest grossing films, taking the tenth place spot away from Iron Man 3 with $1.222 billion while The Fate of the Furious moved into 12th place all time with $1.214 billion and it’s closing in on Iron Man 3 as well.

May Movie Preview
Alien alien covenant Battle at the Box Office beauty and the beast box office diary of a wimpy kid: the long haul everything everything guardians of the galaxy vol. 2 king arthur prometheus snatched the fate of the furious