We’ve got the chance for you to win a Ray Harryhausen themed prize pack from the fine folks at Comet.  In case you’ve never heard of it before, Comet is a network that is probably broadcasting locally over the air in your area if you have a digital antenna but you can also watch it at CometTV.com as well.  Comet airs classic and cult sci-fi movies and shows, including MST3K and Stargate SG-1.  This month they’ve been airing classics featuring the stop motion wizardry of Ray Harryhausen and this coming week you have the chance to check them out at the following times:

They are also airing classics like Labyrinth, Troll 1 and 2, The Adventures of Baron Munchausen and the Garbage Pail Kids Movie this week and next as well.  To celebrate the Ray Harryhausen movies airing this month, Comet put together a prize pack that includes an exclusive shirt, an army of plastic skeleton warriors, some skeleton candy, a refrigerator magnet and a sticker: 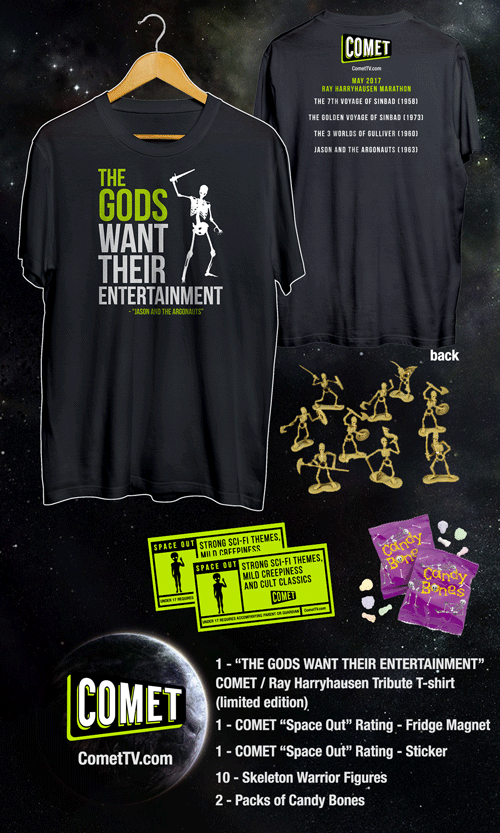 To enter, e-mail contact@everythingaction.com with the subject line “Comet Contest” with your favorite Ray Harryhausen creature or movie.  You have until Friday, May 26th at 11:59 PM EST to enter.