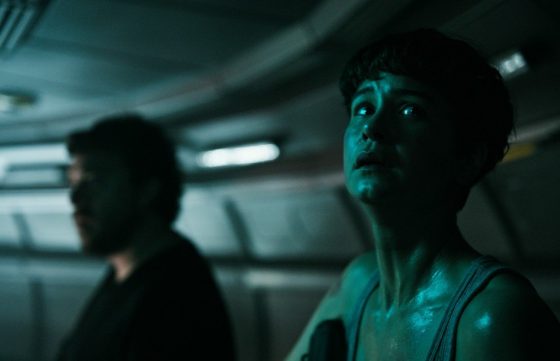 Ridley Scott is back to continue filling in the backstory of the Alien universe with the follow-up to Prometheus, Alien: Covenant.

Set 10 years after Prometheus, the Covenant is a colony ship with 2,000 colonists and 15 crewmembers on the way to the Earth-like planet Origae-6 to setup the first off Earth colony but, on the journey there, the ship is hit by a blast of neutron energy from a nearby star and the crew is awakened early to repair the damage.  While doing these repairs, the crew gets a strange transmission from a much closer planet with better stats for sustaining life, so they divert to check it out and stumble into a house of horrors constructed by the last remaining Prometheus crew member, David (Michael Fassbender).  Tonally and plot wise, Covenant is much closer to the original Alien films than Prometheus was and it has gnarlier and more frequent action/horror set pieces as well thanks to the inclusion of both the new “Neomorph” alien and the return of the classic Xenomorph, the former of which is the focus of most of the mythology building this time around.  The problem is that I don’t think any of us really care about how the Xenomorphs came to be and, at least I was hoping, for more about the Engineers based on the setup at the end of Prometheus but there is pretty much no new information about them here, which is pretty disappointing considering they were the biggest addition to the mythology in Prometheus.  The ending of the movie also feels a bit rushed and there’s a final 15-20 minute sequence that feels kind of tacked on and repeating a similar sequence we just literally just saw and there’s a “twist” that should be obvious to even casual movie fans.

As far as the cast goes, Fassbender is operating on another level beyond anyone else, playing both David and new android Walter with completely different personalities and accents and the most bizarrely interesting scenes are the ones they share together as they have homoerotic discussions about creation and flute playing and David has a great ambiguously evil demeanor where it seems like he might actually be helpful before performing some new unspeakable horror.  Katherine Waterson and Danny McBride are great as arguably the two most competent and likeable members of the colony mission, with McBride in particular doing a great job of retaining his inherent “Mcbrideness” while still pulling off the dramatic scenes.  The rest of cast is pretty interchangeable and uninteresting and mostly exist to become fodder for the various horrors of David’s planet.  They aren’t quite as stupid as the Prometheus crew as far as taking off their helmets in unknown atmospheres or poking weird creatures but there are still some boneheaded decisions they make that seem to only be made to further the plot.  There’s one particular decision by Billy Crudup late in the movie that is mind-blowingly stupid.  Also, what was the point of casting James Franco for, maybe, a minute of screen time?

If there’s one thing that is always consistently great about Ridley Scott movies, it’s that they look incredible and Covenant is no exception.  Just like Prometheus, the environments and the CG are spectacular and the CG creation of the Neo and Xenomorphs look great for the most part as well.  Nothing will top the OG Alien suit but the CG does allow for more agile and nimble alien creatures and, especially the Neomorph, are as vicious as they’ve ever been.

Alien: Covenant is a solid entry in the Alien series, probably third best overall, but it doesn’t really add anything that new or interesting to the mythology and it definitely doesn’t follow up on the questions raised by Prometheus.  It’s definitely worth seeing for Fassbender and some crazy alien violence but serious fans of the Alien lore will most likely be disappointed.