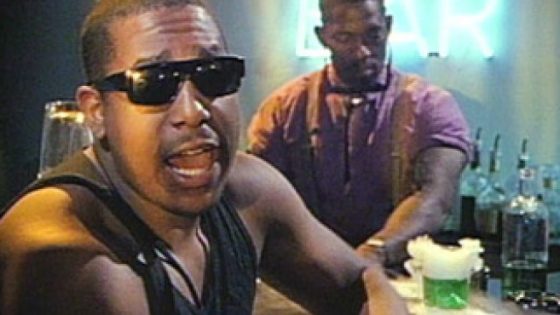 Rapper Tone-Loc was an absolute force in the 90’s, appearing in movies (like the target of our May commentary, Blank Check), voicing acting in cartoons and, of course, dropping two massive hit songs in Wild Thing and Funky Cold Medina, both off his debut album “Loc-ed After Dark”, which hit number one in the US when it debuted in 1989.  Wild Thing went 2x platinum and peaked at number 2 on the Billboard Hot while Funky Cold Medina peaked at number 3 and was certified platinum.  Both songs feature rock samples, with Wild Thing using Van Halen’s “Jamie’s Cryin” and that resulted in some legal trouble as Van Halen’s management didn’t consult the band and, when Wild Thing blew up, the band sued and settled out of court.  Both songs didn’t have particularly high concept music videos; Wild Thing only cost $500 to shoot and was a black and white take on Robert Palmer’s “Addicted to Love” music video while Funky Cold Medina looks like it cost slightly more and is set in a bar where Tone discovers the love potion that is Funky Cold Medina.  Check out both videos below.