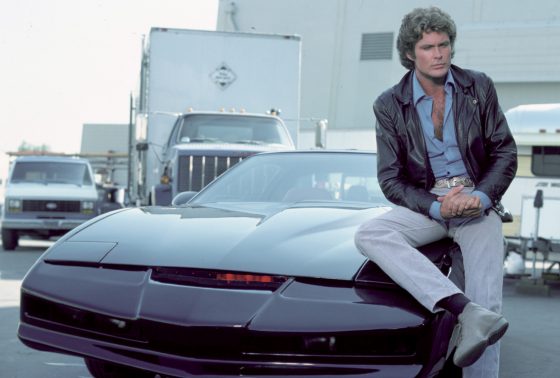 Now that the craziness of the regular TV season is over, Auto Pilot is back to dive back into TV past for the weird, awesome and classic first episodes of shows and, to kick things back off in proper fashion, we’re diving into the world of vehicular action shows this month.  The genre hit it’s ridiculous peak in the 90’s with shows we’ll get into later this month like Cobra, Viper and Thunder in Paradise but we’re kicking things off with the 80’s classic, Knight Rider.

Episode Title: Knight of the Phoenix

Did I Know Anything Going In?: I knew the basic premise, the awesome theme song and things like KARR and the Turbo Boost but had never seen a full episode.

Before he was keeping the Bay safe as Mitch Buchannon on Baywatch, The Hoff was patrolling the backroads of the 80’s in the high tech Trans Am KITT in Knight Rider.  The first episode aired as a two hour movie on NBC in 1982 and Michael’s first mission sends him to the strange land of Silicon Valley on a quest for revenge.

Michael Knight actually starts out as Michael Long, an LAPD detective who has been undercover trying to unravel an industrial espionage scheme but he’s betrayed by one of the executives he’s been protecting, Tanya, and is left for dead after getting shot by her in the face and she and her partner, Fred Wilson escape with plans for a high tech new microchip.  Michael is picked up by billionaire Wilton Knight and his partner Devon Miles, who somehow manage to keep Michael hidden as he’s declared legally dead and he’s given a new face via plastic surgery to repair the damage from being shot (Michael had a metal plate in his head from Vietnam).  A few months later, Michael is recovered and Knight and Miles reveal they want him to become the first agent of their FLAG (Foundation for Law and Government) initiative and they’ve developed a high tech Trans Am called the Knight Industries 2000 or KITT.  Most of KITT’s classic features are used at least once in the episode, like his Turbo Boost and self driving but one aspect of KITT that doesn’t get enough mention is that the metal used to build him makes him indestructible and he blasts through walls and semi-trucks without a scratch throughout the episode.

After Wilton Knight dies, Michael decides to work with FLAG, at least to take down Tanya and Wilson, and he heads to Silicon Valley, where the duo have become high level executives at the company Comtron.  No one really seemed to know what Silicon Valley was or what anyone was up to during this time and the way it’s portrayed here is like a weird small town with a local tiki bar and Comtron hosts, of all things, a demolition derby, that forms the middle set piece of the pilot where Michael enters KITT into the derby and they obviously win, defeating Comtron’s army of redneck truckers, including Rambo II’s Charles Napier.  After the derby, Michael tries to meet with Tanya but she sends the truckers to the tiki bar and they get into a bar brawl that results in Michael getting thrown in jail and KITT taken to Comtron but KITT escapes and break Michael out by smashing through the jail wall.  The duo heads back to Comtron and Michael catches Tanya stealing another prototype microchip and is shot again, this time in the shoulder, and Tanya escapes and Michael and KITT pursue them, but Michael refuses to give control over to KITT, as he doesn’t fully trust KITT to drive or look out for him until the end of the episode when they truly become partners.  Tanya and Wilson attempt to flee in a private jet but Michael smashes KITT through the wing and brings down the plane before it can take off and Tanya gets out and tries to shoot Michael but the bullet hits KITT’s bulletproof glass and kills her instead.  Wilson is kidnapped and KITT drives Michael back to a staging area for FLAG, where Devon has arrived to help Michael and KITT.  Michael agrees to continue fighting a solo war against crime and injustice and he and KITT drive off to patrol the roads of America.

Knight Rider definitely lives up to it’s reputation as one of the best shows of the 80’s.  Hasselhoff is a great leading man who’s tough but also cares about helping people and his relationship with KITT is great and delivers lots of humor and William Daniels as KITT is instantly trustworthy and likeable.  There’s some fun vehicular action sequences and KITT’s look, with that bad ass red light in the hood, will never not be cool and that theme song is legendary.