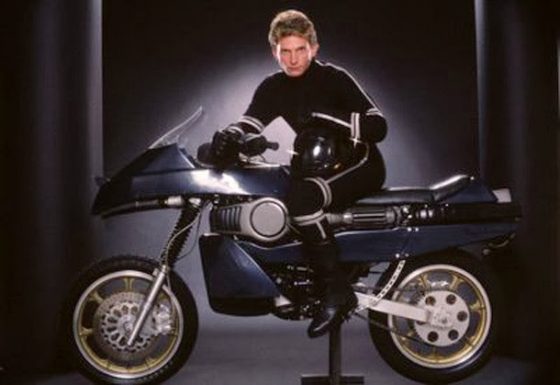 Did I Know Anything Going In?: Not a thing

Airing on ABC for one season in 1985, Street Hawk focused on a secret government project headed up by engineer Norman Tuttle (Joe Regalbuto), who has created a $3 million high tech motorcycle but, like most of these secret crime fighting vehicle projects, they do not have a driver good enough to handle it.  Norman’s bosses think local motorcycle cop Jesse Mach (Rex Smith) would be a good candidate after Norman gets footage of him performing an Evel Knievel style stunt on his patrol bike but Jesse isn’t interested when Norman approaches him while he’s trying to repair his dirt bike when he and his partner Marty go out to the desert to race.  Marty unfortunately stumbles across a drug deal headed up by none other than Christopher Lloyd as the villain of the pilot, Anthony Corrido.  Corrido has Marty killed and, when Jesse catches up, he’s run down by Corrido’s massive custom truck, which carries two motocross riders who have been ambushing police drug shipments to the Coast Guard.  Jesse is not killed but suffers permanent damage to his knee and is taken off active duty and assigned to the PR department (he avoids the fate of the last two heroes we’ve talked about by not getting plastic surgery and/or his memory wiped).

Norman approaches him again and says he’s still the top candidate for Street Hawk and they can give him some experimental surgery for his knee.  This time Jesse agrees because it will help him catch whoever killed Marty, which Jesse eventually figures out is part of a cover up with the corrupt police commissioner.  After an extended training montage, Jesse is finally ready to take out Street Hawk for a trial run.  Speaking of the training montage, I have to mention that probably the best thing about this show is the music from synth legends Tangerine Dream.  They provided music for movies like Red Heat, Legend, Risky Business and Sorcerer and it’s on point in Street Hawk, making even the cheesiest, corniest action beat feel much cooler in than it should.  For his first run, Jesse tests the systems, including “Hyperthrust”, which is a computer assisted boost that pushes Street Hawk to over 300 mph (and results in almost Stanley Kubrickian sequence where things turn into an incomprehensible blur around Jesse’s head) and hydraulic shocks that allow Street Hawk to leap over obstacles.  Jesse uses both, and some front mounted lasers, to stop a robbery at a local convenience store.  Since he has to keep Street Hawk a secret, Jesse basically becomes a superhero with a secret identity and pisses off his PR co-worker Sandy, who constantly demands to know where he is.  He comes up with the somewhat plausible explanation that he’s been investigating Marty’s murder and recruits her to help him check local paint shops to see who might have done the expensive paint job on the custom truck.  Sandy gets kidnapped by the corrupt commissioner and brought to Corrido’s mansion while Jesse and Street Hawk manage to stop Corrido’s motocross guys from ambushing another shipment.  Jesse goes rogue however once he knows who and where Corrido is and attacks his mansion, bizarrely abandoning Street Hawk for most of it and instead stealing a machine gun from one of Corrido’s goons.  Corrido escapes in a his truck and a final chase ensuses, with Jesse pulling off the supposedly physically impossible stunt of using Street Hawk’s launching ability combined with it’s instant stop braking airfoils to do a backflip over Corrido’s truck, which crashes into a canyon and kills him.  Jesse returns Street Hawk and Norman, though pissed, lets it go and they continue their vigilante mission against crime.

Street Hawk is a decently fun show but, at least this first episodes, takes a while to get going, with Jesse not riding Street Hawk until at least 40 minutes into the 70 minute pilot and there’s not nearly as much vehicle action as Knight Rider or Viper.  It’s also pretty corny, with Jesse hamming it up and dropping a bunch of cheesy one liners and it almost feels like there should be a laugh track at times.  The show did manage to draw in some future giants however, like Christopher Lloyd for this episode or George Freakin’ Clooney for the second episode: 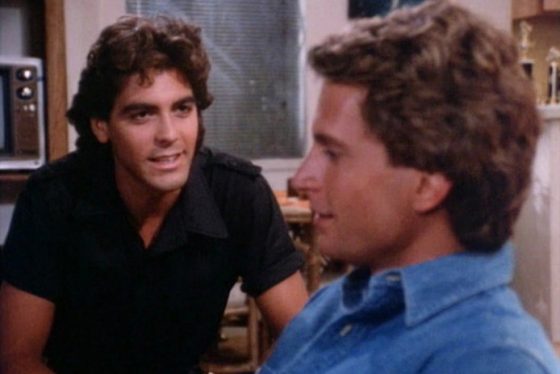 There were also appearances by character acting greats like Charles Napier and Gregory Itzin as well.  The show seems to have developed enough of a cult following for Shout Factory to release the entire series in a collector’s edition set in 2010 and it even had toys and novels in the UK and Brazil.