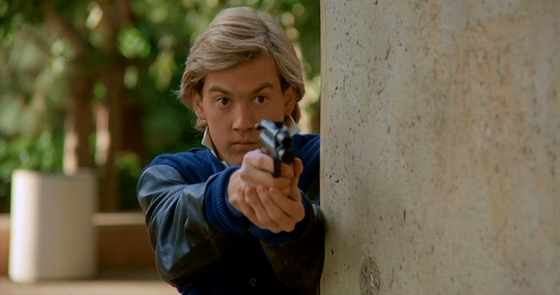 Coming out in 1985, Gotcha is a forgotten action/comedy from director Jeff Kanew, director of Revenge of the Nerds, who reteamed with star Anthony Edwards, who played UCLA student Jonathan Moore, who gets caught up in international espionage while traveling abroad in Europe.  The movie did not get very good reviews when it came out and only made $10 million at the box office and it’s even less remembered today than something like Zapped, which was at least referenced on Family Guy.  Equally not doing as great was the single from the movie’s soundtrack, also titled Gotcha! and sung by British singer Thereza Bazar.  Bazar was previously involved in the very successful British group Dollar in the 70’s and she went solo the same year as Gotcha but her theme song did not chart.  She did make a music video, which plays up the espionage themes of the movie as Bazar enters nightclubs and secret labs.  Check it out below.