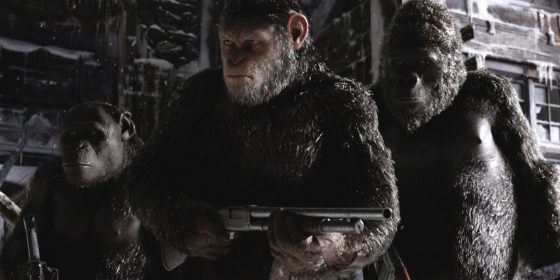 Picking up a few years after Dawn, Caesar (Andy Serkis) and his ape clan are waging a war for survival against the fanatical forces of Colonel McCullough (Woody Harrelson). Betrayed by one of their own, the Colonel leads an attack on the apes’ secret home and deals a personal blow to Caesar that drives him into a quest for revenge.  War is easily the darkest and most dramatic of the new Apes trilogy as Caesar gives into his inner rage and, as brought up by the insightful and compassionate Maurice, he gets dangerously close the attitude that fueled Koba, who Caesar has dark, guilt driven hallucinations of. The movie also, despite it’s title, turns more into a prisoners of war movie than an actual war movie, with Caesar having to figure out a way to rescue his people from being slave labor for the Colonel after they are captured.  The flip side to that is that there is maybe not the level of action spectacle you might be expecting.  The movie is bookended by two great battle sequences but the main focus is on evolving the character relationships and the dramatic conflict between Caesar and the Colonel.  There is some levity from the heavy themes and drama though, like new character Bad Ape, voiced by Steve Zahn, who is the first ape Caesar encounters outside of his group that has gained intelligence (he’s also the first ape in the new series to wear clothes) and although he could have gone into Jar Jar territory, he stays on the side of funny and sweet and provides some much needed comic relief.  Also very sweet is the relationship between Nova (Amiah Miller) and Maurice, who continues to be the hairy orange heart of the franchise and Amiah Miller picks up the baton from Logan’s Dafne Keene as far as great performances by young actresses go, giving a fantastic wordless performance and she also provides an interesting way that this world could lead into the actual Planet of the Apes.

After seeing Dawn, it didn’t seem possible that the CG could get any better but somehow in War, it is.  There is not a second that you don’t 100% believe that Caesar, Maurice, Rocket, Luka and the other apes are real, living character and Andy Serkis continues to deliver Oscar worthy work as Caesar and the other motion capture actors are incredible as well.  On the human side, besides the aforementioned Amiah Miller, Woody Harrelson is solid but is kind of hitting the same beats as Gary Oldman from Dawn and he probably could have been slightly more unhinged, as he’s essentially a cult leader where his cult is heavily armed soldiers.  The humans are really secondary in these movies though and everything with the apes is incredible and the fact that we get so much drama and emotion from sign language and facial expressions is just mind blowing and the CG acting in War is better than most live action acting in other movies and I definitely care more about characters like Caesar and Maurice than a lot of other recent characters.  Matt Reeves also continues to shoot absolutely jaw dropping and gorgeous locations from the apes sanctuary behind a waterfall to Caesar and his companions journeying on horseback across the forest filled landscape to the Colonel’s wintry base, everything is incredibly shot and full of little, world building details, especially around the Colonel’s base with anti-ape graffiti and creepy mottos.

This new Apes trilogy is easily one of the strongest trilogies in movie history and War is a stunning and dramatic capper on the series.  The CG and motion capture acting is the best you will currently see, especially from Andy Serkis, and it dives into some deep, dramatic themes that most summer blockbusters wouldn’t even attempt to touch.  If you’ve loved the prior two Apes movies and have not seen War yet, drop what you are doing and see it immediately.

The War for the Planet Begins in July (Trailer)