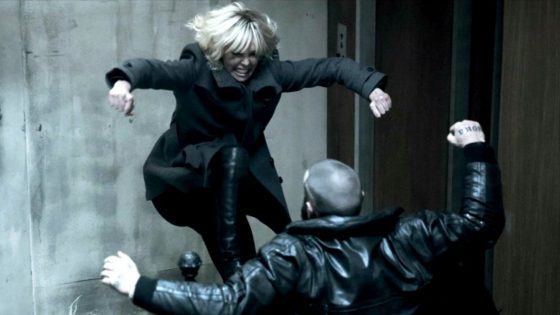 With one of the directors of John Wick and a super stylish 80’s Cold War setting, it seemed like Atomic Blonde was going to be one of the action centerpieces of the summer but, unfortunately, it is disappointingly not as action packed and streamlined as the Wick movies.

Taking place in Berlin on the eve of the Berlin Wall coming down, Lorraine Broughton (Charlize Theron) is sent in undercover to recover a stolen list of undercover operative identities, which was taken from a fellow MI6 agent who was murdered.  Lorraine gets help in the field from head of station David Percival (James McAvoy), who has his finger in a bunch of underworld pies in both the East and West Berlins.  Probably the biggest issue or at least the biggest disappointment is that the movie seems much more focused on the spy craft/espionage side of things so there are more scenes of people listening to taped conversations and stalking through the streets than there are the bone crunching fight sequences that were the highlight of the trailer.  Those action sequences are still there and, for the most part, are pretty great, especially a mid-movie sequence that sort of apes the first season Daredevil hallway fight, just with a shootout tacked on before and Lorraine and her opponent are both barely able to stand toward the end.  That sequence also leads into a Children of Men style car chase that takes place almost entirely in the car and if the movie had had more of those sequences sprinkled throughout, it would have been incredible but instead there’s more trying to figure out who is double crossing who and what is actually going on, which John Wick managed to brilliantly cut out in both movies.  The movie really gets kind of lost in the weeds toward the end when the true double crosses are revealed but then flipped and you don’t really have any idea how we got to that point or why.  It’s not as dense as something like Tinker Tailor Soldier Spy, which was nigh incomprehensible without multiple viewings because of how dense it was but it’s still more than you would probably be expecting going in and it drags down the movie as a whole.  There’s also the slightly strange decision to frame everything as already happened, so we know there’s never any real threat to Lorraine and they don’t even really use it to show what Lorraine is saying and what actually happened, a la True Detective Season 1 when Rust and Marty take credit for a massive shootout.

The one thing that does work really well is Charlize Theron, who seems like she could go toe to toe with Daniel Craig’s Bond and shares a lot of his sensibilities and demeanor.  From the preferred drink to the doomed love interest, she really is a female Bond and I hope she gets another, more action packed movie to show off her chops, because she’s really the best female action star going.  I believe she’s able to beat down the guys she’s up against in this movie but she’s not an otherworldly fighter like John Wick and she takes as many brutal beatdowns as she gives.   James McAvoy is also pretty great as the sleazy Percival but like most of the spy plot, his ultimate goal and motivation is kind of murky.  The movie also looks pretty amazing, with lots fancy nightclubs and chances for Lorraine to wear insanely stylish outfits while listening to the best of late 80’s New Wave but I wish the movie was more concerned with actually doing cool things rather than just looking cool and, speaking of the soundtrack, all the songs included are incredible but it’s a little ridiculous as far as digetic and non-digetic music goes.  You’ll hear a song on a radio and then it will take over the scene for a bit and then you’ll hear it on someone else’s radio and they seem to be leaning on the soundtrack lend excitement to scenes that are not or make everything seem cooler than it is.

Atomic Blonde is a pretty big disappointment but it’s not a terrible movie, you just have to massively adjust your expectations from a John Wick style action movie to a more slow paced spycraft thriller.  There’s still some great action but it’s much more sparingly used, except for the massive set piece in the middle, but the movie gets lost in it’s plot and try to outsmart the audience with twists and double crosses.  If it had been more straight forward plot wise and focused on action a la John Wick, this might have been one of the best movies of the summer but I can’t really fully recommend it as is.