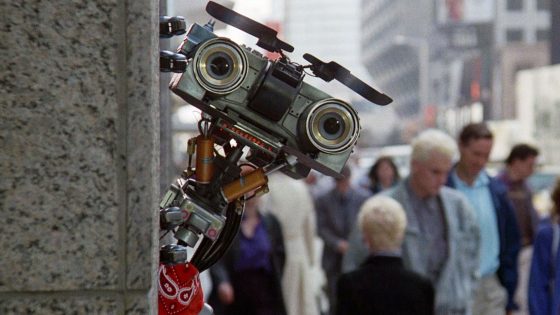 After going solo from DeBarge, El DeBarge scored a massive hit off the Short Circuit soundtrack with “Who’s Johnny”.  Released in 1986 along with the movie, the song hit #3 on the Billboard Hot 100 and #1 on the R&B charts and, probably the most important determiner of success, Weird Al made a parody version called “Here’s Johnny” about the Tonight Show announcer Ed McMahon.  Possibly canon in the Short Circuit universe, the music video for “Who’s Johnny” is pretty elaborate and features Ally Sheedy playing her character Stephanie Speck as a court case is in process seemingly over the events of the movie.  DeBarge is somehow a key witness but the prosecutor only asks “Who’s Johnny?” over and over again while Johnny 5 sneakily causes mischief around the courtroom, swapping out glasses, messing up papers, etc.  There’s also a weird cardboard cutout in place of Steve Guttenberg, who wasn’t available for the video.  You can check out the whole thing below.