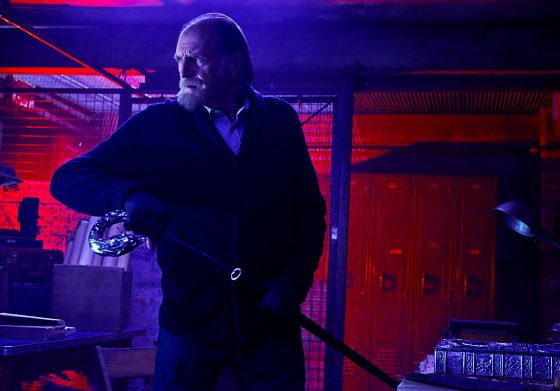 Without much fanfare, The Strain wrapped up its particular brand of insanity this past Sunday in a mostly satisfying manner but it never quite became a great, or even good, show.

I know myself and I’m sure a lot of nerds were excited for the premiere of The Strain, mostly because it was going to be a show executive produced by Guillermo Del Toro, based on book he co-wrote with Chuck Hogan and it did have some solid GDT  style characters, like Professor Setrakian, the Jewish pawn broker who has been single handedly waging a war against vampires, or strigoi in the parlance of the show, for decades or rat catcher Fet who has an encyclopedic knowledge of NYC architecture.  The creature design was also almost always wonderfully gross and weird.  The strigoi, unlike traditional vampires, have a gigantic tentacle/stinger that comes out of their mouth and they use that to attack victims and there were numerous kills over the four seasons of characters yanking that stinger out all the way.  The vampirism is also spread by disgusting white worms that crawl into eyes and are visible under the skin.  The strigoi themselves were never really the problem on the show and it seems like GDT and the show’s creators really honed in on fleshing out how they work and making them look as good and disgusting as possible.  There was however an issue with constantly shifting how to defeat The Master, the ruler of the strigoi, as first it’s just sunlight, then a special coffin and so on until eventually the solution is just nuke him, which was bizarrely a much more frequently used solution for both the heroes and villains than you might think.  Before the nuclear option, there was at least two seasons regarding the hunt for and then deciphering of a magcical book called The Lumen that was Setrakian’s main drive but it ultimately was all just wasted effort because the Lumen was pretty much useless and didn’t factor into the final season at all, which kind of diminishes Setrakian’s arc over the entire season.  There were a lot of great ideas like that that just fizzled out, like a group of black ops strigoi working in opposition to the master or the Ancients, a disgusting group of elder strigoi that The Master was once a part of, but both of those plots, and many more, were inelegantly cut off before they even had a chance to turn into something interesting and/or awesome.

The main problem with The Strain was mostly a pacing/plotting one in that, for at least the first 2 seasons, there was never really any indication of just how far the strigoi infection had spread or who even knew about it.  The sort of Outbreak intro was pretty interesting but it took way too long for the threat to be acknowledge as the potential apocalypse it was. Our heroes were battling hordes of them every night but it seemed like life was proceeding as normally in NYC for most random civilians, who didn’t seem to know anything was going on for way too long.  Even when Samantha Mathis’ tough talking Staten Island councilwoman was leading the counterattack through Manhattan, there was a sense of, “just let this crazy broad do her weird vampire thing while we deal with real issues”.   There was never really any sense of what was going on outside of NYC as well; it seems like most of the rest of the US were reacting like it was just a super strong version of the flu. The only season that was interesting and felt like it had stakes was the final season, so too little, too late there.  The other major problem is that while there some great characters like the aforementioned Setrakian or Fet, they also had arguably the worst character in television history with Zach Goodweather, the son of protagonist Dr. Eph Goodweather.  Every single decision and plot involving Zach was indescribably bad, including nuking NYC because he was mad at his dad (that is real) and the final season just amplified that awfulness to new levels, especially since was under the care of The Master and became a spoiled, emo douchebag who murdered a girl because she didn’t buy into his “but I’m a nice guy” schtick (Zach should really have been wearing a fedora the entire final season).  Zach is right alongside Barbara from Gotham, Betty from Mad Men and the other hateable, terrible TV characters and he’s one of the driving forces that kept the show from being consistently good as, especially Eph’s plots, all revolved around keeping him safe when all you wanted is for a strigoi to violently kill him.

Now that it’s wrapped up, should you watch The Strain if you have never watched it?  Um…maybe?  There are shows that do the same thing it does way better, like The Walking Dead or Penny Dreadful (side note: just go watch Penny Dreadful), so I can’t really recommend that you watch this before those or other stronger shows and I kind of only stuck with it because I felt like I was pot committed after 2 and then 3 seasons.  There were some fun, gnarly, crazy moments that were worth watching and there were some great characters who deserved a stronger show but overall, it never really lived up to the promise of a weekly Del Toro vampire show.