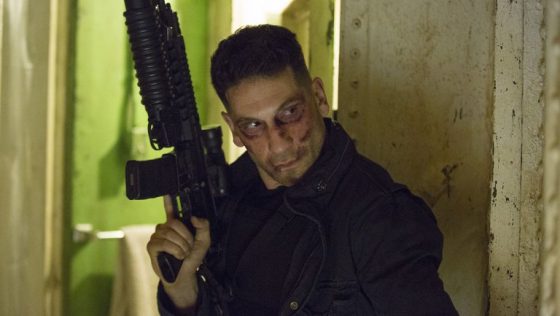 Although we still don’t have a solid release date, Frank Castle is returning to Netflix sometime before the end of 2017 with the highly anticipated first season of The Punisher.  In his solo outing, Frank (Jon Bernthal) is trying to get vengeance for the murder of his family and uncovers a conspiracy involving the CIA and a black ops mission and, as Frank gets deeper, he becomes the target of the Agency as well as the FBI, Homeland and the NYPD.  Karen Page (Deborah Ann Woll) is back to help Frank from Daredevil and Frank also gets a new ally in Micro (Ebon Moss-Bachrach),  a former NSA analyst who provides technological assistance.  Steve Lightfoot, who was an executive producer on Hannibal, is the showrunner.  It looks awesome, with tons of guns, explosions and blood, which is what you expect from The Punisher.  Check out the trailer below and I would place good money that we’ll finally get a release date in a few weeks from NYCC.