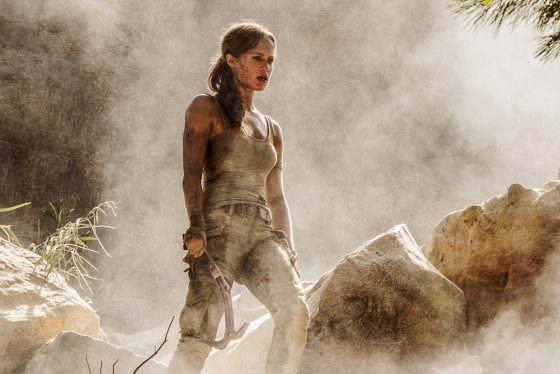 The films based on Tomb Raider with Angelina Jolie are considered some of the better video game adaptations, but that ain’t saying much.  They were decent action movies but didn’t really capture the adventuring, Indiana Jones feel of the games and instead were more like a Bond movie, especially the second one where Lara spent more time in generic laboratories than in actual tombs, but now Alicia Vikander is taking over from Jolie to bring Lara to life again on the big screen in what looks like a much more faithful way.

Based on the incredible 2013 Tomb Raider reboot from Square Enix, Lara Croft uncovers a secret vault in her father’s crypt that reveals he was working on locating a tomb called the “Mother of Death” on an uncharted island that, if discovered, could unleash a terrible power on the world.  Richard Croft urges his daughter to continue his work via a video message and Lara takes up the cause but ends up shipwrecked and captured by mercenaries, led by Walton Goggins, who work for the fanatical organization Trinity, who want to use the power of the Mother of Death tomb to take over the world.  Daniel Wu of Into the Badlands co-stars as Lara’s sidekick Lu Ren and Nick Frost pops up as well.  It’s directed by Roar Uthaug, who directed the well received disaster movie The Wave.  The movie looks exactly like the game with Lara getting her new trademark bow and climbing axe, the villainous Trinity and Lara getting the shit kicked out of her via insane jumps and falls.  The movie is out on March 16th next year and you can check out the trailer below.