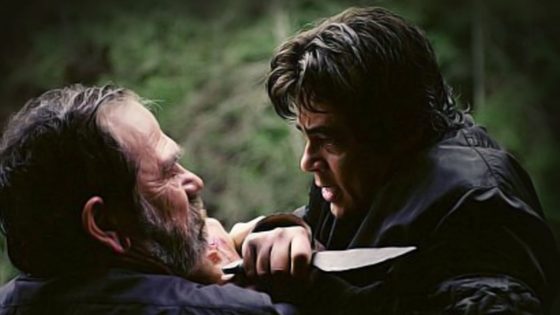 Directed by the legendary William Friedkin, 2003’s The Hunted put Tommy Lee Jones on the trail of another fugitive, only this time it was an unhinged killing machine that he personally trained.  Co-starring Benicio Del Toro, Jones is LT Bonham, a deep woods tracker and an expert that gives US soldiers specialized training in survival and killing.  Del Toro is one of his students and after many black ops assassination missions, he loses it and starts killing innocent civilians in Silver Woods State Park in Oregon.  The FBI gets involved and recruits LT to track down his former student and stop his killing spree.  It’s basically if Tommy Lee Jones’ character from The Fugitive was hunting Rambo.  There’s some brutal CQC fights between Del Toro and Jones and the bad ass plot point that they both craft their own knives out of scrap metal and it’s the perfect Saturday afternoon action movie.  You can watch the whole thing below thanks to Tubi TV.

Everything Action Theater: Eye See You