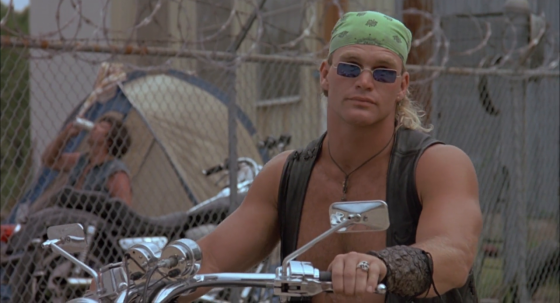 Playing over the end credits of the Brian Bosworth classic Stone Cold (which has a commentary from us coming on Thursday!), “Dangerous” was a single off The Doobie Brothers disastrous 1991 album Brotherhood.  After gradually leaving the group over differences in the band’s direction and clashes with Michael McDonald, original members Tom Johnston, Patrick Simmons, Tiran Porter, John Hartman and Michael Hossack had reunited in 1987 for a charity tour, which went so well they recorded the surprise hit Cycles album in 1987 but Brotherhood did not work out as a follow up and Capitol Records dropped the group from their ranks.  “Dangerous” was at least a mild hit on the Mainstream Rock charts, hitting #2, and it was Patrick Simmons’ ode to riding Harleys, so it fit right into the undercover biker world of Stone Cold (although that album title has unfortunate connections to the evil white supremacist villains of the movie).  The official music video features The Boz, although it feels like at least 5 different music video ideas smashed into one.  There’s The Boz watching The Doobies playing on a fire escape in an alley but then he goes to his apartment from Stone Cold and watches Stone Cold, then there appear to bloopers from Stone Cold and then there’s also a white void with a hot girl on motorcycle and clips from the movie throughout.  Try to make sense of it yourself by checking it out below.

Movie of the Month: Stone Cold