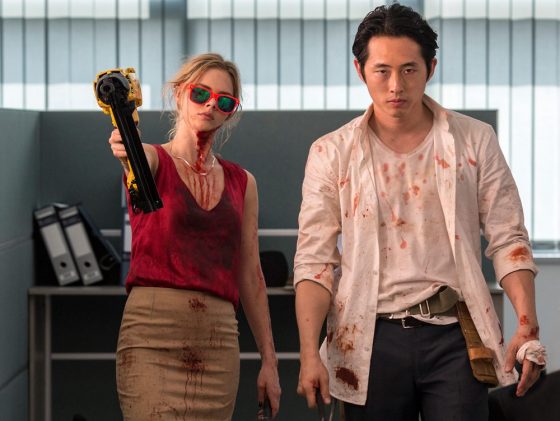 Earlier this year we got The Belko Experiment, which was written by James Gunn but, except for the antics of his brother Sean, lacked the humor and heart that you normally get in his projects.  Mayhem has a similar premise as Belko but looks like it has way more of the dark humor you might have been expecting from the prior movie.  Steven Yeun stars as Derek Cho, who gets fired from his law firm but before he can try to negotiate with his bosses or storm out, the building is locked down because of a viral outbreak that causes everyone to act on their worst impulses, which means lots of murder.  Derek teams up with a client of the firm, Melanie Cross (Samara Weaving) and the pair fight their way to the top of the building to take down the executives.  Joe Lynch, who directed Everly and Knights of Badassdom, is directing Mayhem and it’s out on VOD and select theaters on November 10th.  Check out the trailer below.